If you missed the first post, it has all the inspiration and background leading up to my final dress idea. This post is only pictures; later in the week I will post about constructing the bodice and the skirt in two separate posts.

Let me say first, it was a beautiful wedding. The weather was sunny and 75, most of our family and friends could make it to New Orleans and it was just an absolutely wonderful day! I am so glad that I made my own dress, making the day even more meaningful to me. I love my dress and it turned into exactly what I wanted, even though I didn't know that in the beginning. :)

Thank you to everyone who cameto the wedding, and THANK YOU to all my sewing blog friends who helped encourage me through the (sometimes rage-filled) process of making it! XOXO, Molly 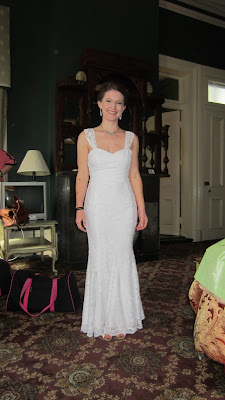 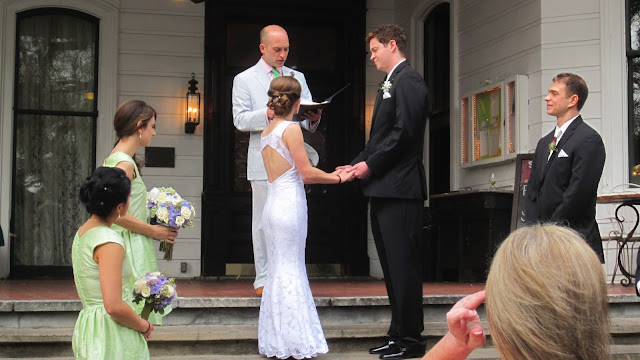 More information to come, but I just wanted to show off my masterpiece!
Posted by Molly at 10:51 AM 32 comments:

Alright ladies, I am on Spring Break from school this week and only working a bit at the restaurant, so I will have time to finally post about my wedding dress. It will be in four posts: this one is inspiration and links to all my trails and tribulations beforehand, the second will just be pictures of the dress, three will be about constructing and sewing the bodice, and four will be about constructing and sewing the skirt. Therefore, the people who don't want too many details can just tune in to post 2.

History of posts leading to my final inspiration/idea:

If you read my blog regualarly, then you have probably seen all of those and are up to date. Basically, the bodice I thought I wanted sucked and I made a different one that I like. Same for the skirt. Copying that vintage pattern for the skirt turned into a nightmare and I quit. Then I changed direction and made a skirt I loved in a matter of days.

So my "vintage inspired" wedding dress turned into a very modern dress. I guess I didn't know what I wanted when I started, because I absolutely love my final dress and it looked awesome. Bam!

Here are my inspiration pictures torn out of Brides magazines: 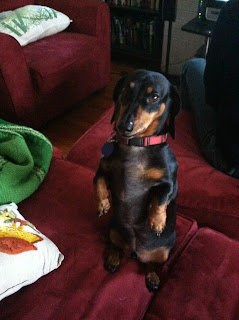 Carmen! Carmen, please email me your mailing address so I can send off the patterns! (mollysewsblog at gmail [.] com) 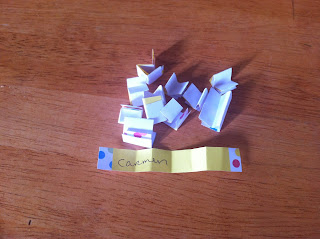 TT is now almost 7 and he has just learned to "pretty sit" on his back legs in the last 6 months or so. It is so cute! Now he just does it to show off. When I bought him, the breeder said they sometimes do that, but he hasn't until now. Old dogs can learn new tricks!
Posted by Molly at 1:28 PM 2 comments:

**Don't forget to enter the March giveaway by midnight if you want to win some patterns!**

I went to two estate sales this morning. One was a waste of time, but the other was interesting. It was near Cicero and Belmont, which isn't too far away. I went because it was the first sale of two for two sisters who owned a two-flat together  Each had her own apartment, they never married and collected sooo many knick-knacks and dolls. OMG. But they both also loved to sew, so there will be a second sale in a few weeks with all of the sewing stuff and more.

Anyways, I don't want freaky dolls or dust collecting figurines. However, in the last room I found three old irons, two of which look new and were still in their boxes. Since everything was 50% off, I bought all three for $17.

Then I took them home to see if they worked. The first one was obviously well-used and got a newer cord at some point. It works and is nicely heavy with a smooth plate. Not that horrible non-stick plate on my modern iron that is melting off every time someone accidentally uses setting 6. It has temp settings on a thumb wheel 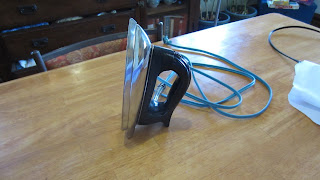 The second was a GE travel irons, new in its box. It has its warranty card, a travel pouch and a detachable cord that you can unplug from the base and then the handle folds down. Kinda cool. It works as well and the box says it weighs two pounds. I think that is going on Etsy. 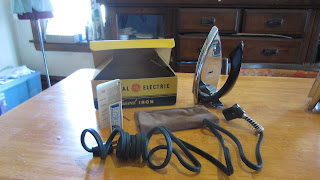 This one is the same as the first iron, but brand new in its box. One and Three are both Sunbeam Ironmasters. Very nice. It works really well. Both Luke and Andrew seem to think I am hell-bent on burning down the house, but people successfully used irons with no auto-shutoff for many years. And not all of those people died in house fires. The cord is brand new and not frayed at all. 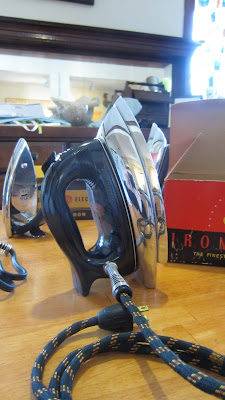 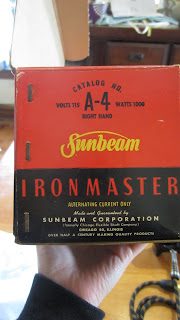 Anyways, it was fun to find some sewing related stuff after a long gap of wasted drives to crappy sales. Yay!

I took a five week class at Lillstreet, which is conveniently close-by. It was really fun trying (and failing) to make things on the wheel! I am going to take a ten week class starting in two weeks, and this time I won't be stressed with wedding stuff. Hopefully, I will have lots of time to go into the studio and practice outside of class (you get open studio time with your class fee!).

Here are the other lopsided things I made, but on to my bowls! The pictures do not show them to scale, as the largest is maybe 5 inches in diameter. They are less than functional for eating, unless you want a tiny bowl of peanuts, or maybe 5 chips...

My final two glazed in teal.

The black one was my first, the blue my second and the yellow my third. 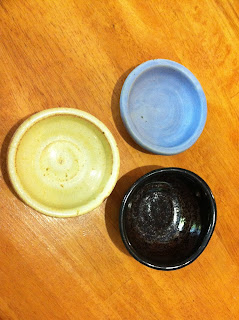 By #2, I learned to level the top and by #3 I was able to make it slightly thinner. They are still absurdly thick though. 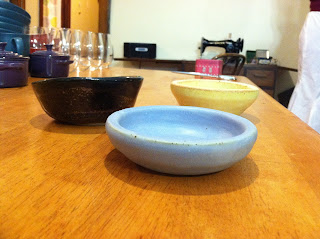 I gave the others away to Andrew and Luke to use for change and stuff, but I kept my yellow salt glazed one. Now I keep my pins in it!
Anyways, just wanted to share and hopefully I will come out of my next class with some awesome stuff. Ironically, we now have matching dishes for the first time ever (from wedding presents), but T-Rex could use some fancy bowls and Andrew said I should make a tiny hand giving the finger to store my rings on at night. Lol.
Posted by Molly at 4:57 PM 3 comments:

Enter to win these four patterns! All you need to do is leave a comment on this post by Saturday March 23 at midnight. The winner gets ALL FOUR patterns and I will ship anywhere. Here are your lovely prizes:

What a varied assortment of garments; you could make a robe, business causal work attire, a matronly oktail dress or even a mini with a giant collar!

Ok y'all. I am alive, but man did last minute wedding stuff suck up all my free time. Oh yeah, and making my wedding dress. I have a ton of stuff to post about in the next week or two!

So last week, which was after my wedding but before my bff Stephanie's, I got an exciting email. Alicia, who lives in Chicago as well, was getting rid of a bunch of her sewing stuff. She said she had tried to sell it on craigslist, but that was making her annoyed and sad, so instead she was giving it away! And she wanted to give some to me! Whoo hoo!

Yay! I went over to her house after work and ended up prancing home with three bags of loot! She was super nice and fun to meet- so thanks, Alicia!

On to the loot:

After I organize all of my pictures, I will post about my bridesmaids and wedding dresses, the stuff I "built" Steph for her wedding, the bowls from my ceramics classes and other stuff I was too busy to post about. Oh yeah, my pattern testing Robson coat for Tasia, as well.

And I will pay back the karmic cycle of sewing giving by having my monthly pattern giveaway in just a few days, so keep you eyes peeled!