I went to gold hawk road today since Andrew had meetings and work. I took the train which was insanely hot, all by myself like a big girl. :)
I went in and out of a million shops on the left hand side of the street and by the time I started looping back on the right hand side, I was ready to buy. The choices are really overwhelming, but I tried to be stingy and not buy a lot as the dollar to pound exchange rate is so terrible. Well for Americans at least. I picture British people going to American playing "make it rain" ie lil Wayne with dollars.
I only bought three things, but they are cool and unique! This is four meters of Swiss voile in a very large, cool print. Pink and brown looks very nice with my skin tone, and I picture it as a maxi dress it something. 25£. Eh. I talked him down a little... 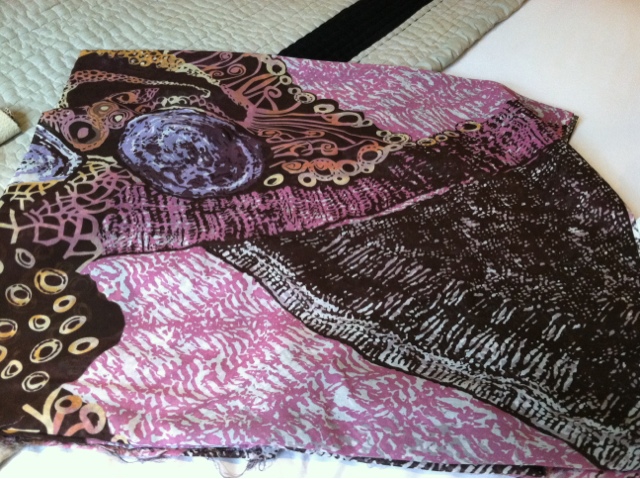 At a different shop, I bought this neon 1990s-meets-Africa print. Two meters for 6£. Knit, but not super stretchy. 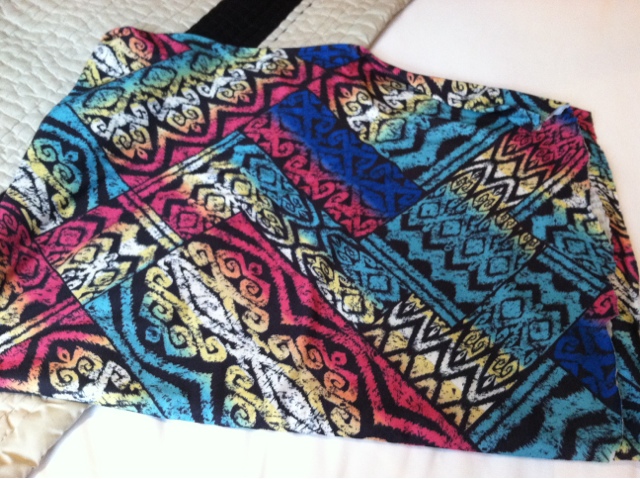 This delight was absolutely worth 25£!!! It's an off white skin and then it's been printed with a shiny giraffe pattern in browny-tan-gold. Its a whole hide. I am going to buy a walking foot and make the sweetest, most awesome leather purse anyone has ever seen!!! 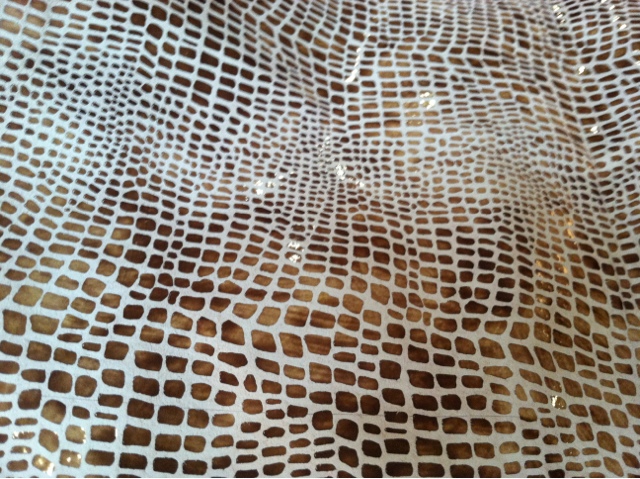 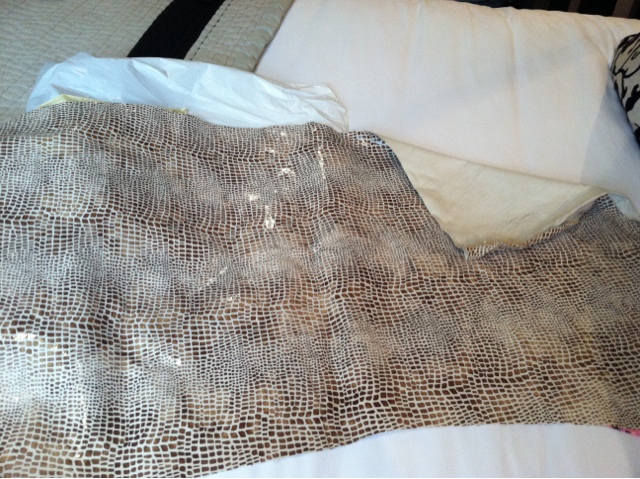 London is super fun and I'm having a great time!!! We're here til Friday so I still have lots of time to explore!
Posted by Molly at 8:31 AM 9 comments: 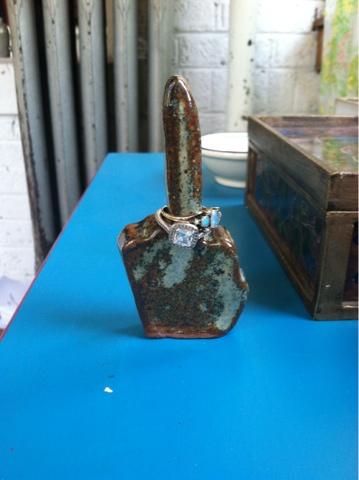 This was the last and best thing I made for my class. I used up a little bit of my leftover clay and shaped this by hand. At the end of my first class, Andrew said I should make a little hand giving the finger to hold my rings and I filed that idea away for later use.
It took a really long time to get fired and I was afraid someone stole it, but luckily that was untrue! The glaze is red clay and mossy green colors and looks awesome.
A true masterpiece! The pinnacle of my oeuvre! The greatest thing ever made from clay!! :)
Posted by Molly at 8:10 AM 3 comments:

I made nine bowls in my pottery class. They are easy to make and fun! The first five are all glazed differently, with the assistance of Andrew. 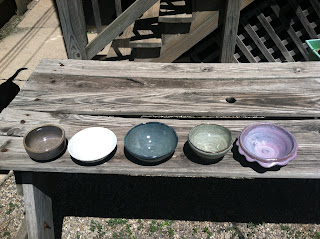 The bowl on the left is kind of a green and purple mix. The one on the right had pink slip on the inside, so I glazed it in white hoping for some contrast. Instead it is just ugly, which is sad; that was the bowl with the nicest shape and thinness. 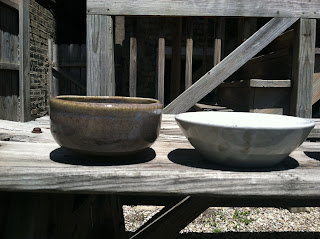 This one has a scalloped rim and is a variety of purple hues. It was supposed to be a larger bowl, but I pinched it too thin and the rim started to droop, so I went with the flow. 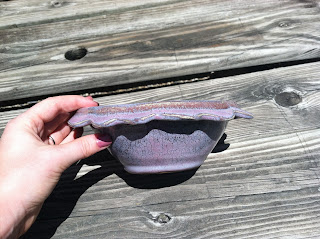 The blue tones bowl is a nice size and the sea green one gets narrower at the base. 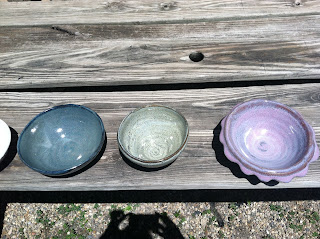 These were glazed to be a matching, but not identical, set. There were five, but one of them disappeared. 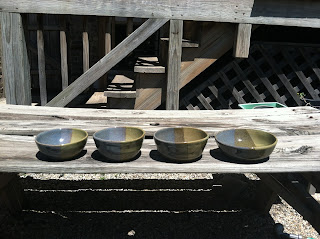 They were dipped half and half in blue and then green, with a stripe of overlap down the center. We did them all in the same order, so it's really interesting how the center stripe is different on two! 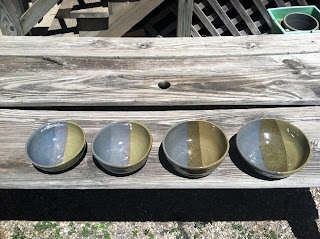 One more post about ceramic stuff and then on to my sewing projects! I have some new stuff in the works and I'll post it before we leave for Europe next Sunday!

I took some pictures a while ago indoors, but the light just did not show off the glaze. Now my class was ten weeks long, but all of these were glazed after the class had officially ended. Five weeks later, I have all of my work glazed and home.

Andrew was my glaze assistant; not only did it speed up the whole process, he has a really good eye for glaze combos that I would have never noticed. he also can spot the stuff on the out-of-kiln shelves so fast after just seeing my terrible sketches.

These are my mugs and random things, all of my bowls will be in a later post. Andrew chose the glazes for the most interesting ones, 2, 3 and 4. 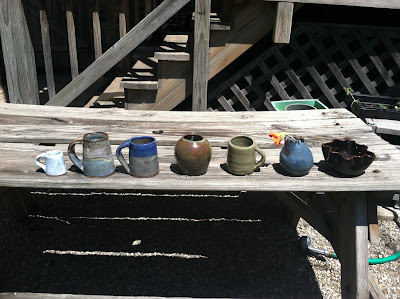 These were my set of "beer steins" but they are far too small! 2 and 3 are normal sized mugs, but very heavy. The "shot mug" was glazed in winter blue, which turned out super ugly! That was my genius choice. I was also practicing making and attaching handles. 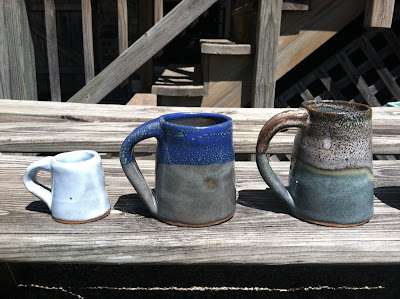 A vase and a wonky mug. The mug doesn't look too bad in this picture. The back lip is about 1/2 inch higher. I had planned to put the handle on so that the higher side is where you would sip, but then I forgot and put the handle on the other side. So that only works if you drink with your left hand. Andrew chose the vase's glaze and it turned out pretty cool! 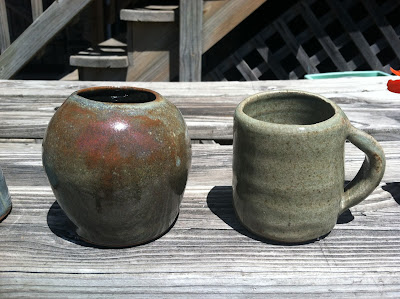 These were a cylinder and bowl that I screw up the rim and became very uneven and thin in places. Scallops are the best fix for that! There were always a lot of scalloped pieces pm the racks of glazed work, and not just mine! The blue I named "La Bombe" because it reminds me of a grenade, though it is technically a vase... The bowl I glazed in my favorite Temoku so it looks black and copper. I am going to keep it by my bed for bobby pins and earrings and such. 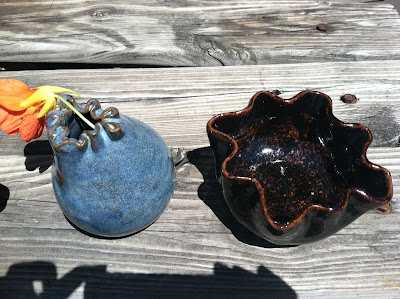 And there's all of them from the top! 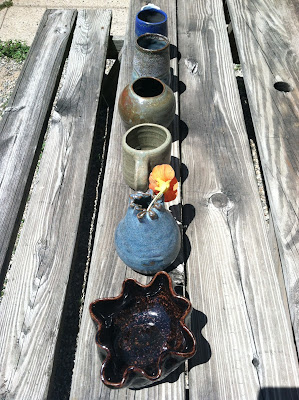 I think I made a lot of progress in this class! I would not say I am "good" at wheelthrowing yet, but some of my things were actually looking like THINGS by the end of class! :()

Andrew and I are leaving for our honeymoon on the 21 July! He is meeting with a client in London first, so I am tagging along. We will be in London from the 21 to the 26 and I will have the days free while he is working to go check out the city on my own. We have both been there briefly (though separately in college) and I have done all the super touristy stuff.

I can spend my time exploring and doing fun stuff, maybe fabric shopping? I don't know. I know many of your will have good advice on things to check out or place to go for fabric shopping! You can reply in the comments or email me at mollysewsblog \a\ gmail.com

Then we are going to visit Andrew's grandparents and family in Corsica for a week. Corsica is an island in the Mediterranean and that will be awesome.

Then we are going to Paris for about five days before we head back to London for our return flight. We met in Paris, so that will be relaxed and we can go to places we like and visit old hangouts. I do want to go to Goutte d'Or, which is that African neighborhood in north Paris, and buy African wax fabric. I really wanted to do that the last time I was in Paris, but I think time was too short. That was 2007, so a while ago! I was not into sewing yet when I lived there in 2005, so that will be interesting!

So any advice on things to do/see/eat etc in London (or Paris) are very much appreciated!
Posted by Molly at 11:46 AM 16 comments: