I made this hideous creature using Simplicity 8133, a pattern from the 60s or 70s. Vintage pattern wiki says 1969.  I thought it would work because it was a somewhat shapeless jumper, with a sort of A-line shape. It is for a 34 bust.
The fabric is some vintage polyester I bought at an estate sale a few months ago. I don't know why I thought large, primary colors (and grey) diagonal swirls would be flattering? Yikes.
I absolutely did not have enough to match the fabric either, so the back looks awful. It was about 2 yards of 60 inch wide fabric, but one third of the way across there was a big snag that ran the ENTIRE length of the fabric. That made cutting difficult. The snag is featured on the front flap that buttons under.
It's shockingly unflattering. So gross.
Um, so that has never been worn and will be disposed of shortly. It deserves to be burned, but I don't want to smell its polyester fumes!
Posted by Molly at 3:02 PM 4 comments:

I knew I wanted to get some sewing done over Thanksgiving break, as I had five days off! I used Simplicity 1360, which is a maternity dress pattern with a twist under the boobs, and gathers in the center front for expansion capabilities. I bought the knit at Jo-Ann previously, and the pattern when it was on sale for 1.00, so I was ready to sew. 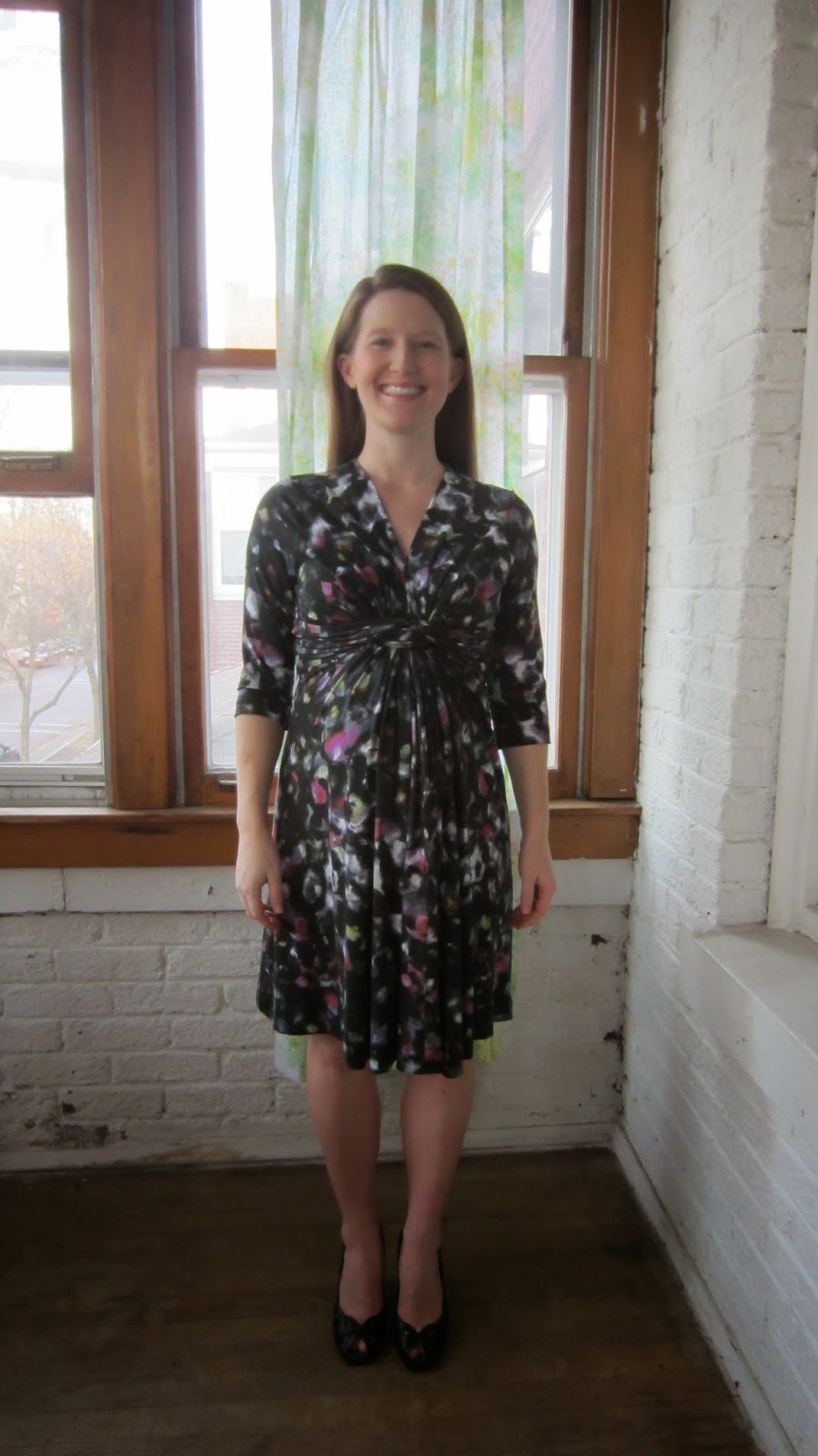 Don't worry, I don't actually wear heels! All of my black flats are in a closet in my classroom, because I walk to school in sneakers and then change. 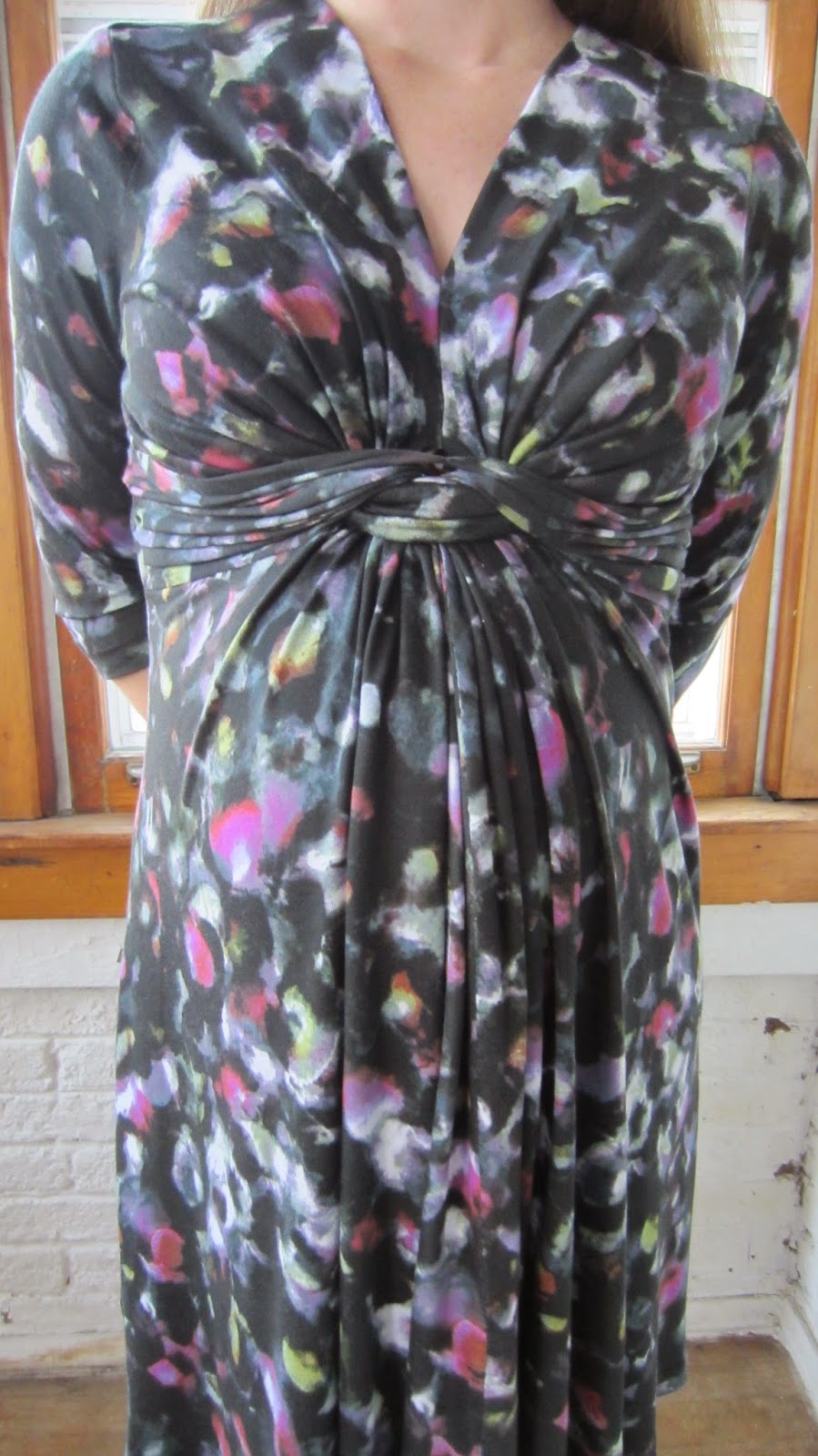 The only part of the pattern that gave me trouble (which actually made me rage-quit on Wednesday and pick it back up on Friday) was the bodice part that forms the center-bottom part of the twist. All of these girls on the envelope are wearing solid colors, the pattern never says anything different for a print, but the back of my fabric is a whitish grey color. So when you pull it through the holes, it actually flips backwards and the white backing was showing. So I had to take it apart, cut out a second bodice piece to make it reversible, and then re-sew it back together. That solved it, but it was an unnecessary frustration. In part because I had never made any top or dress with a twist like that. 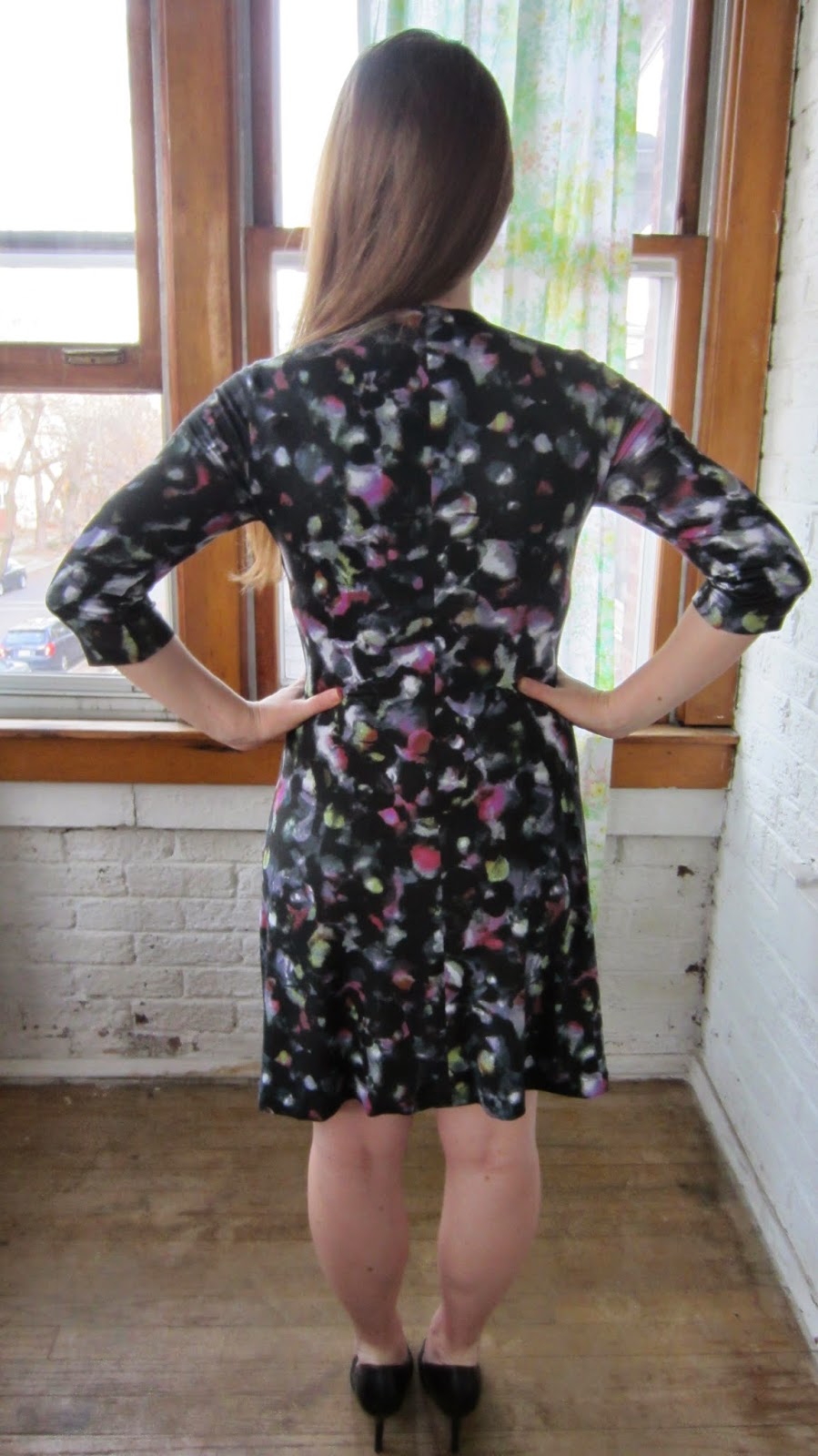 From the back, I still look the same! 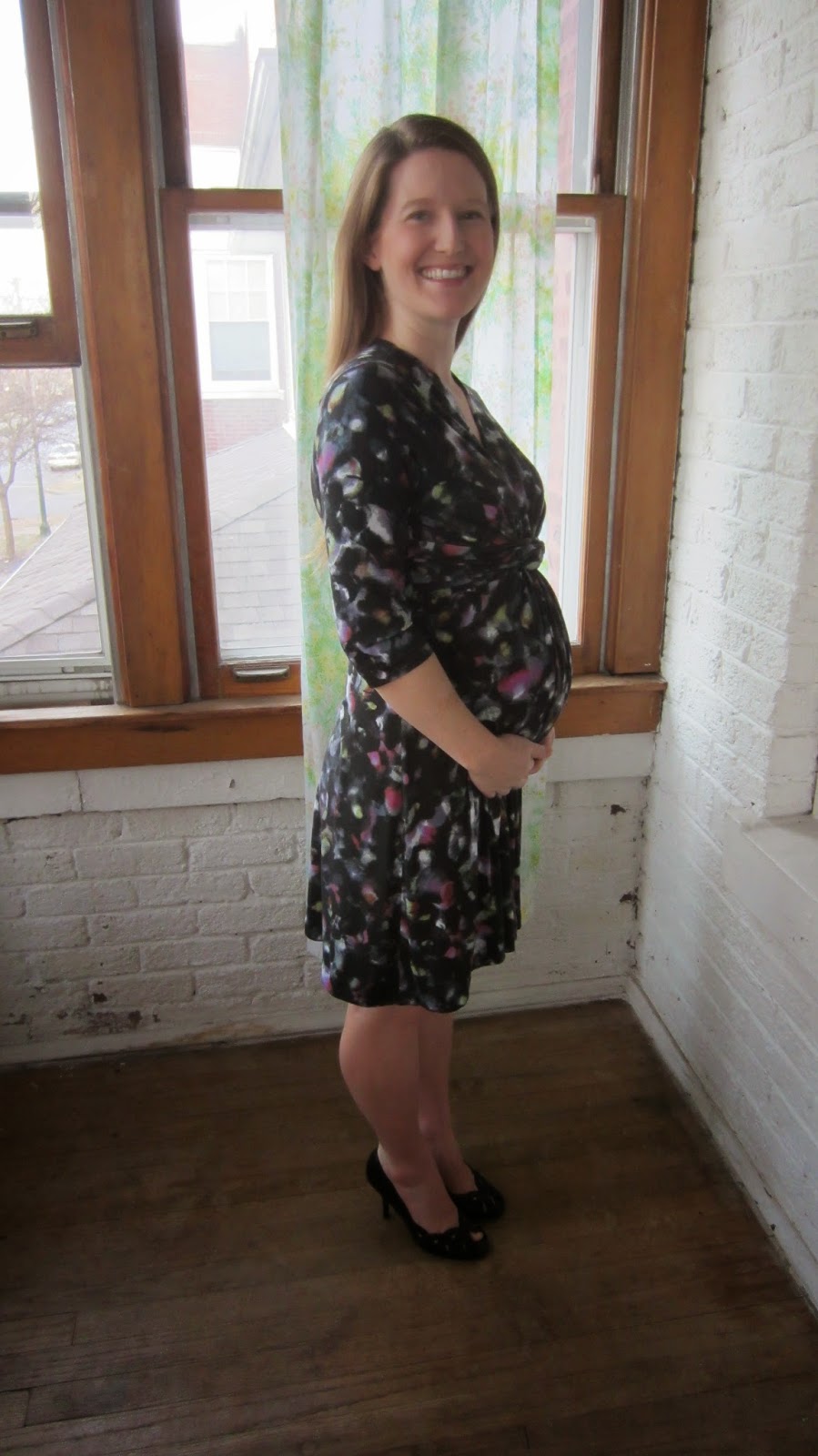 From the side, not so much!! I am due March 3rd, so exactly three months from today! Exciting! 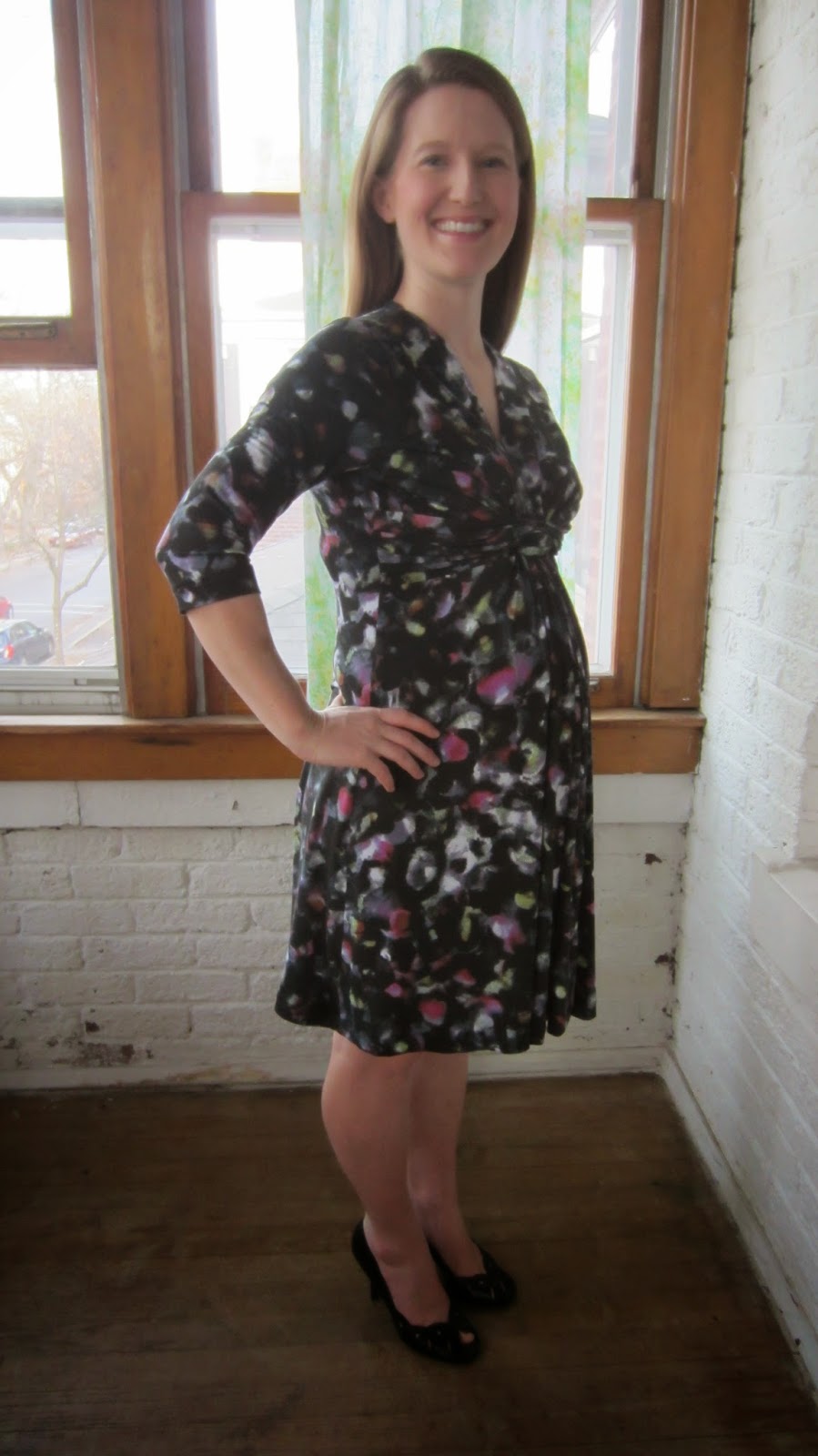 It's pretty and flattering and I am really happy with this dress! I had originally been looking for Vogue 1027, a mock wrap dress, from Kat's recommendation a few months ago. Of course, my Jo-Ann was sold out, but I thought this pattern was similar and it is!

I have one hideous failure to show you later this week, and I am working on my winter coat, which is about half done! Just in time, as I am on my largest coat right now and it barely closes! While I have had it for three years (?!?) I hardly ever wear it because the fur feels really over-the-top, but now I have no choice!!

I bought the fabric and cut out the pattern right on the heels of making this dress at the beginning of September. The pattern is a "See n Sew" Butterick 5837 and I cut it out in a size 12 like the other one. By not leaving any time in between, I did not get the time to realize how giant that would make the shoulders! 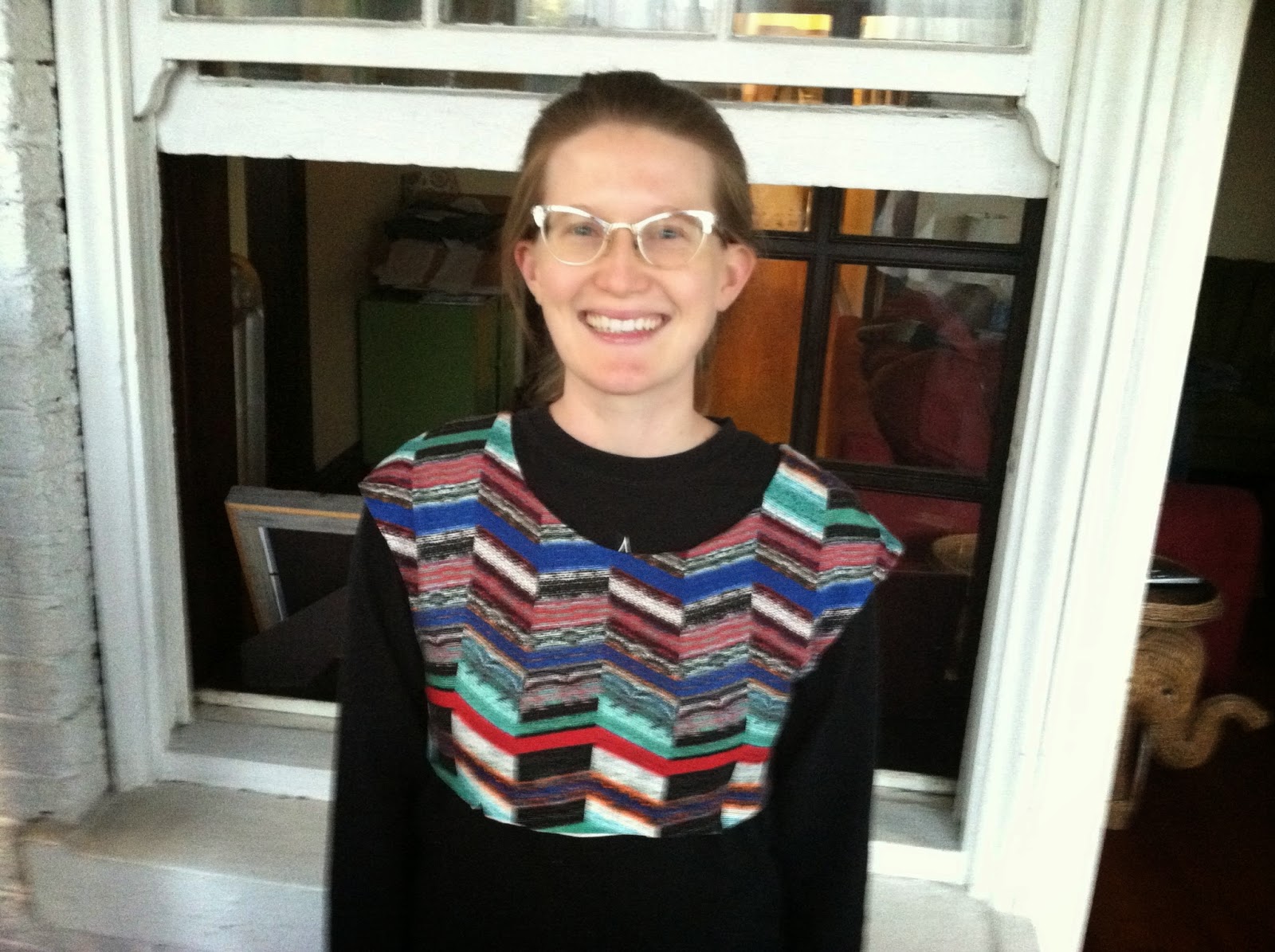 Terrible fitting, and the whole bodice is lined and turned through a tiny hole, so it's not like it wanted to re-do the whole thing. 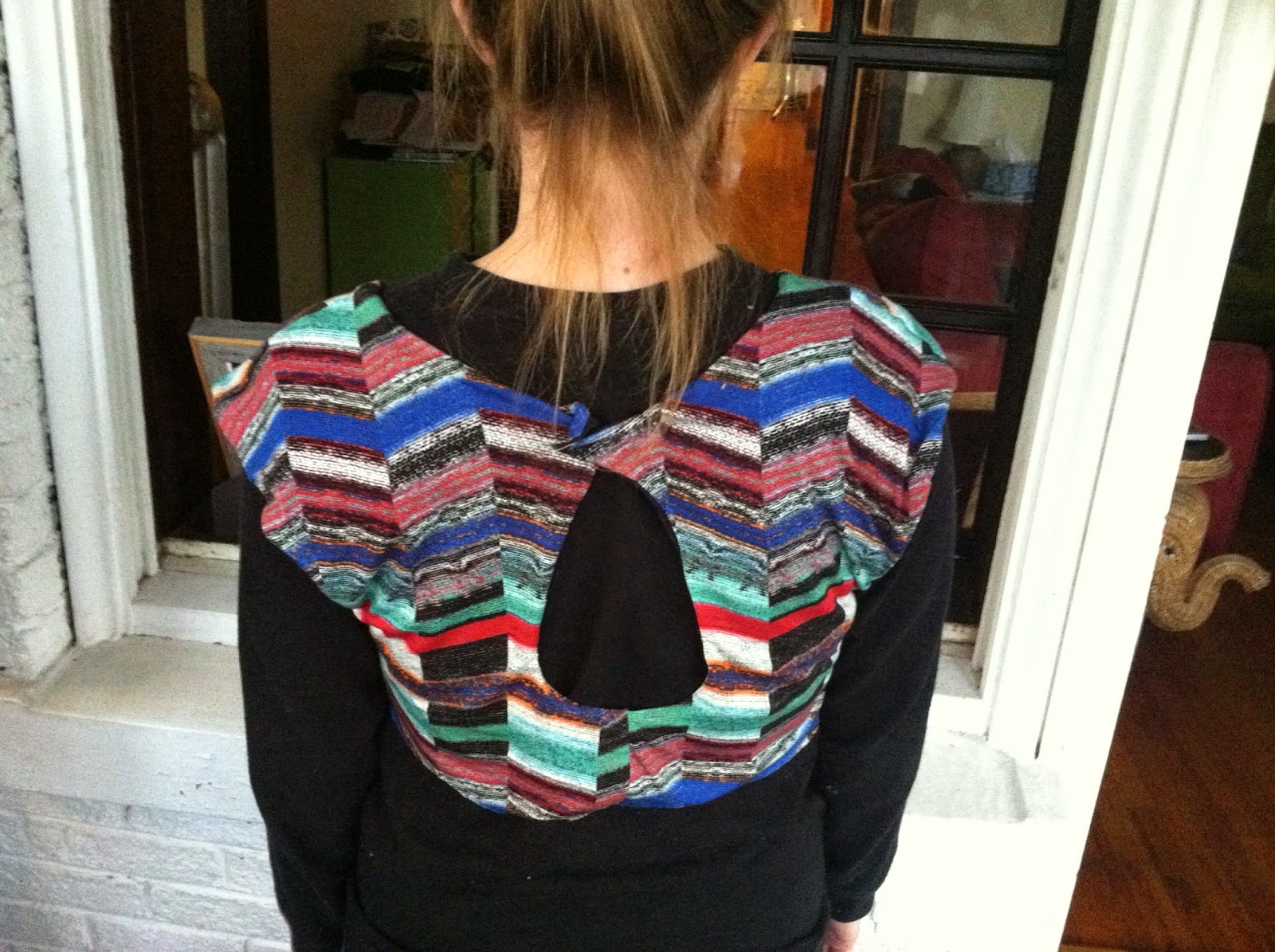 Gack! In the end, I kept the skirt part to make into a maxi skirt and threw the top portion away. 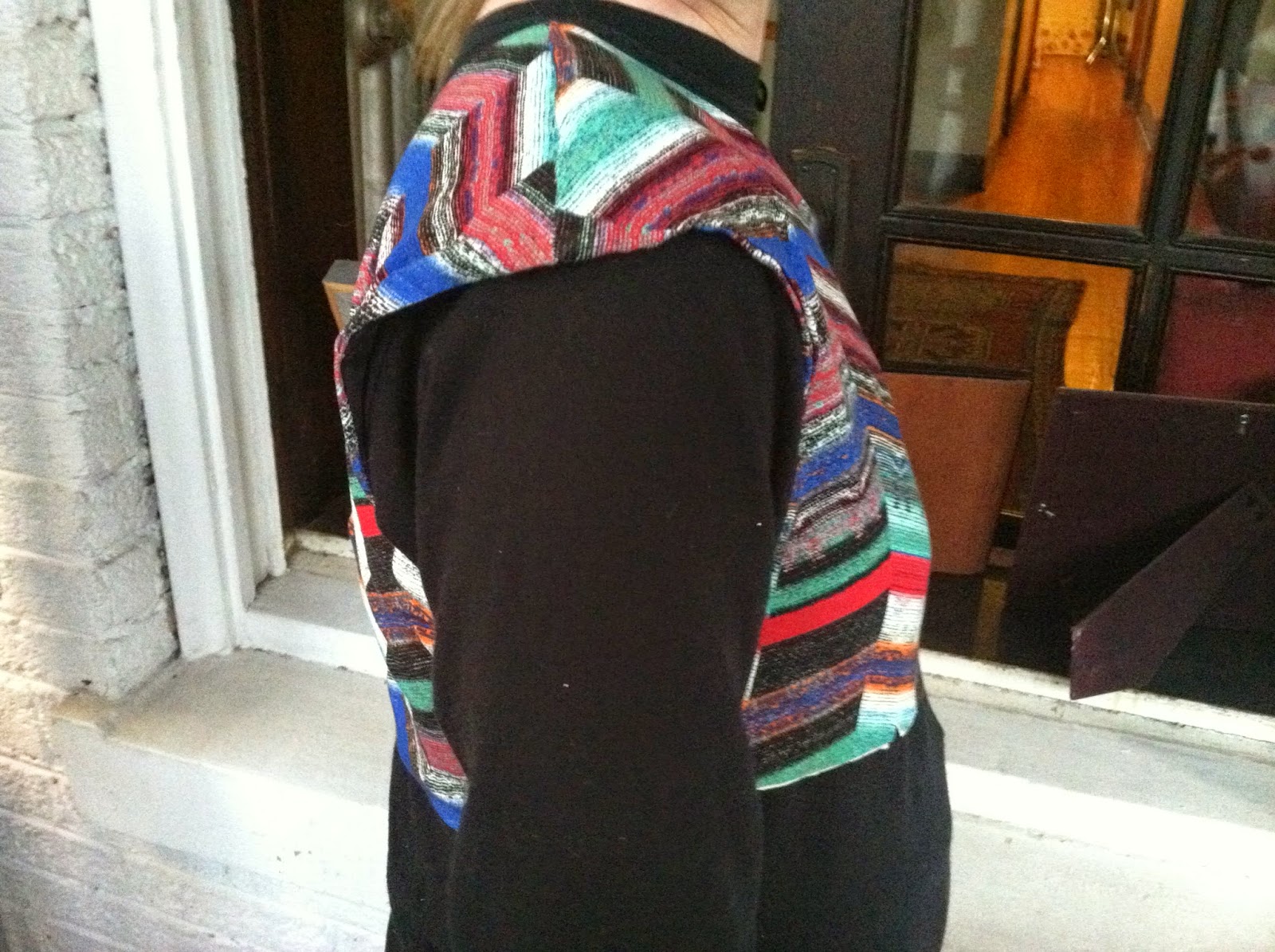 I have been wearing this skirt a LOT for the past month or two. It is just a simple rectangle, but I did take the time to match up the stripes at the side seams. I left it unhemmed, as it won't unravel. The waist is two parallel rows of half inch elastic, which was meant to sort of copy some knit pants from Target with a shirred waist (minus how itchy the shirring is). 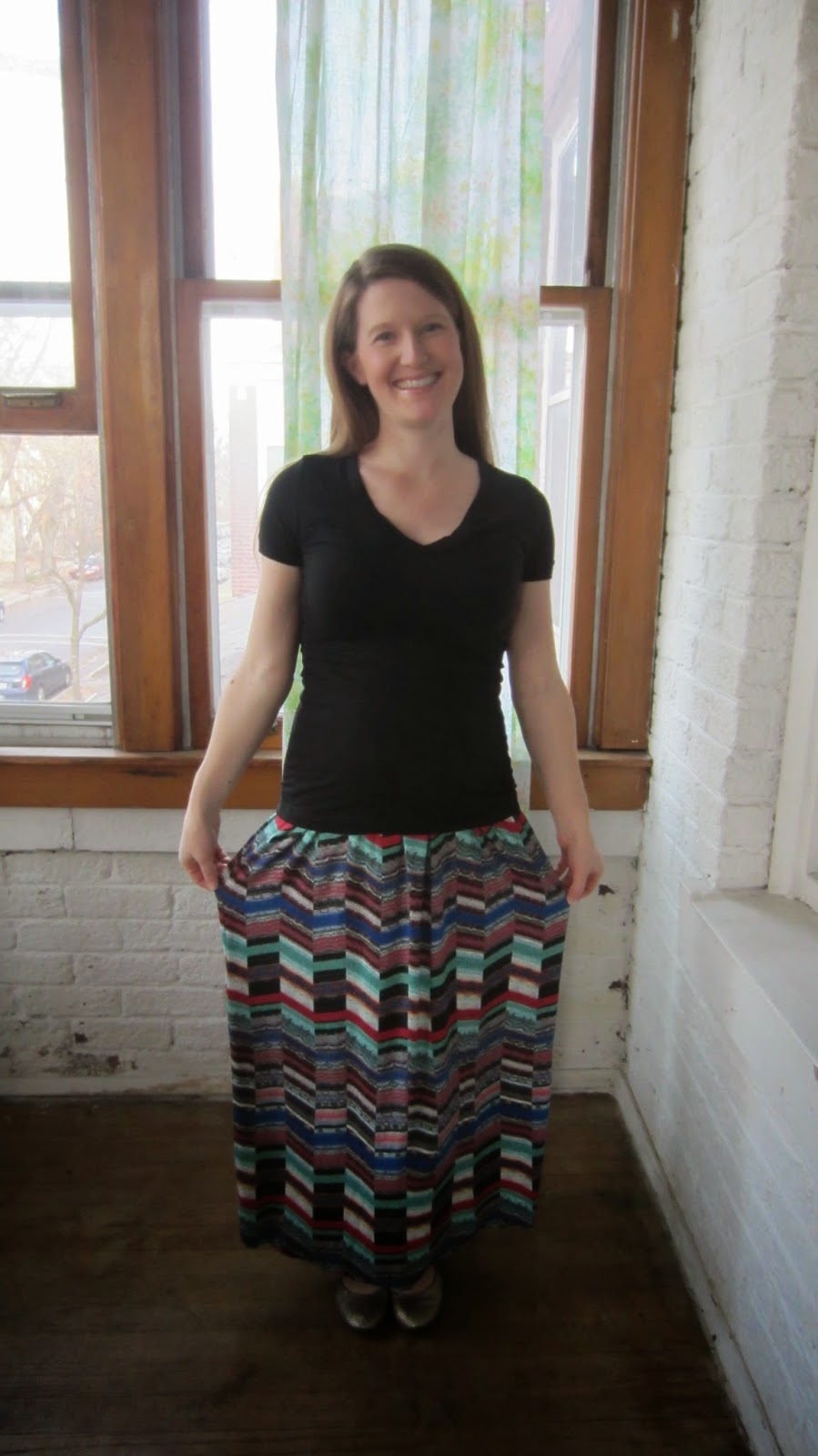 I can wear it with a shirt untucked over it, which is how I usually do. The print is from Jo-Ann and is just a somewhat thin knit. I have been wearing leggings or tights underneath as it is already feeling like winter here in Chicago. 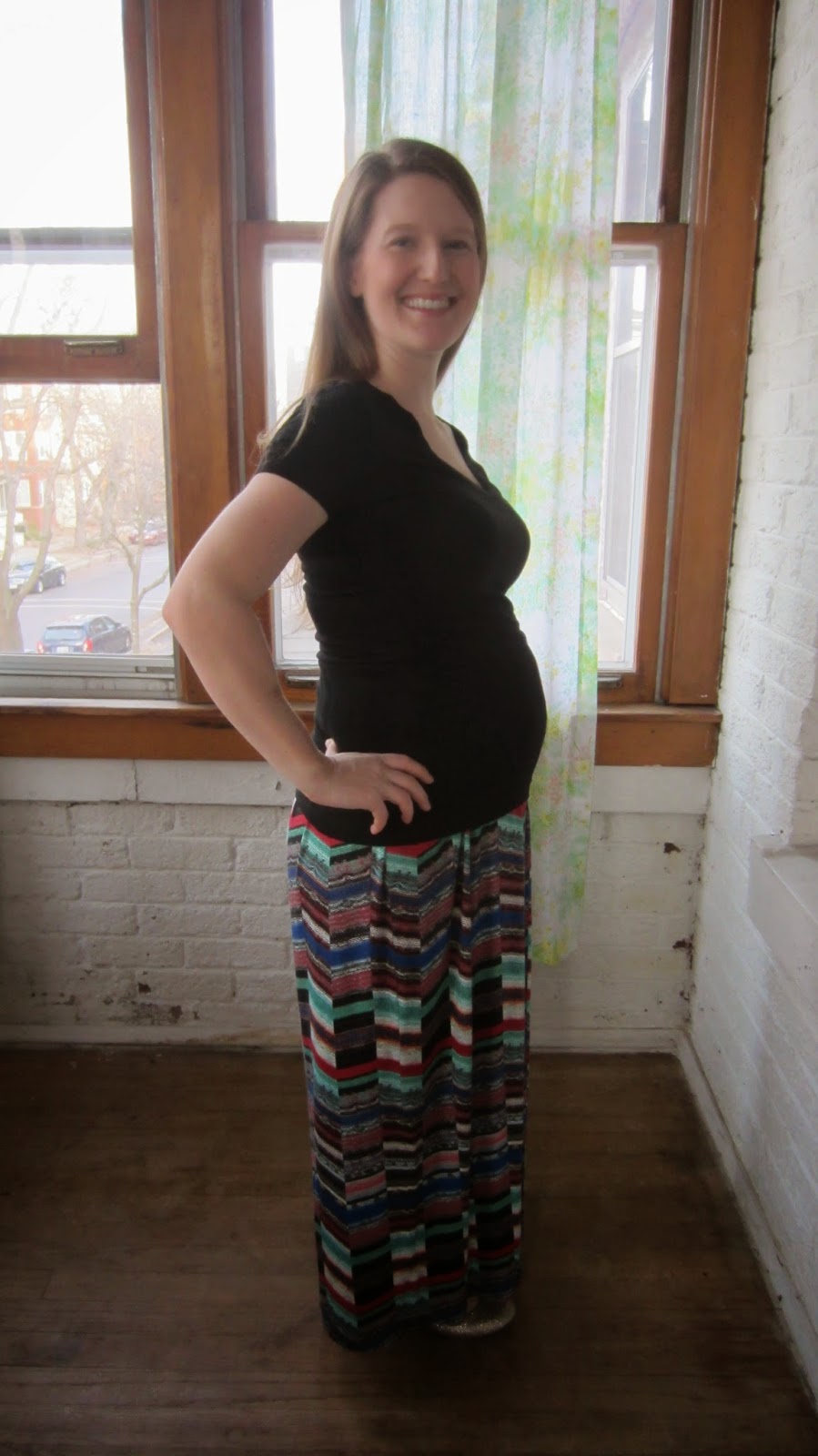 Tucked in also works, but it does make me feel like I am wearing a circus tent a little bit. 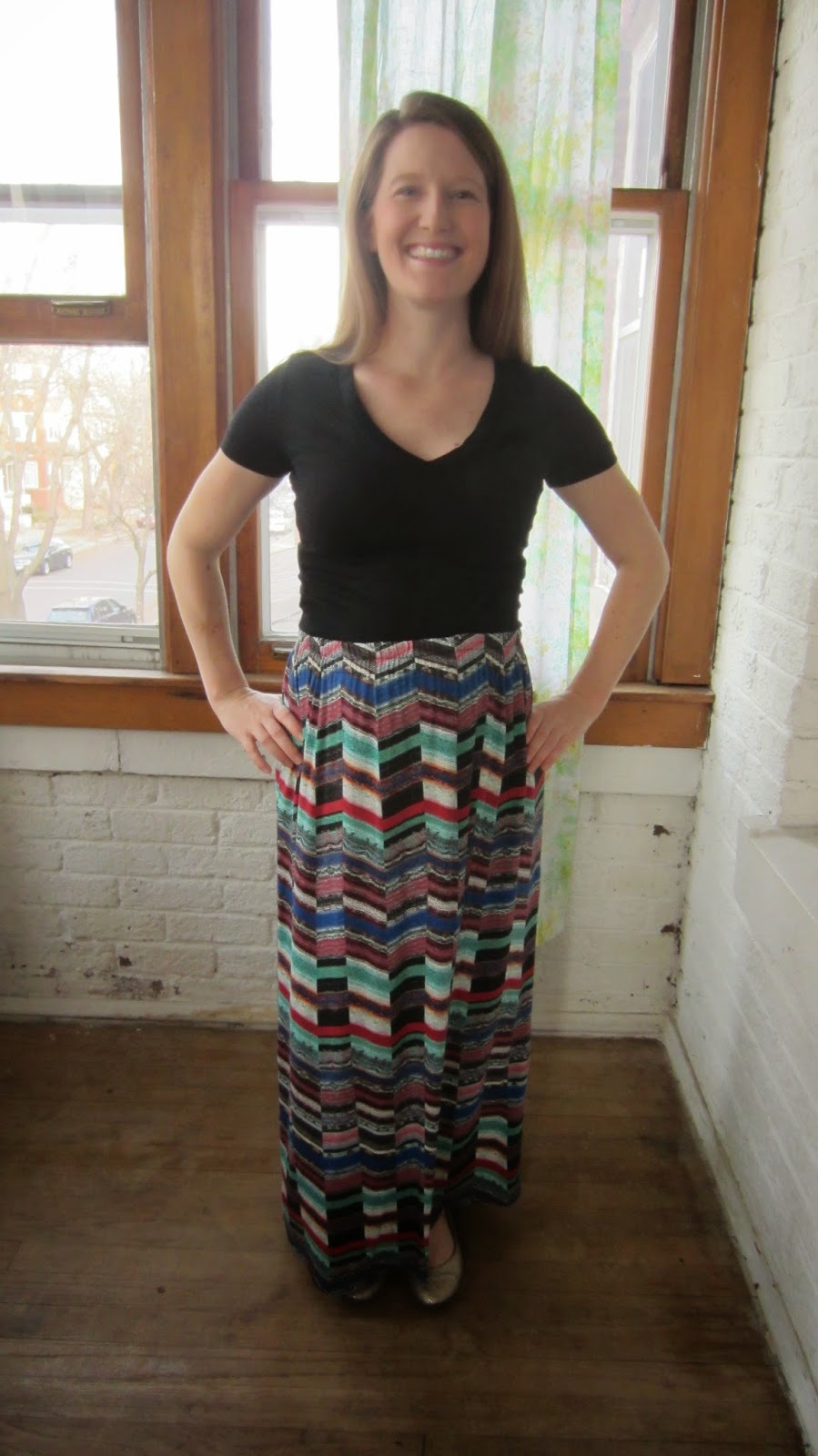 I am for sure looking much more pregnant and there's no disguising it anymore! I am just about 6.5 months in. 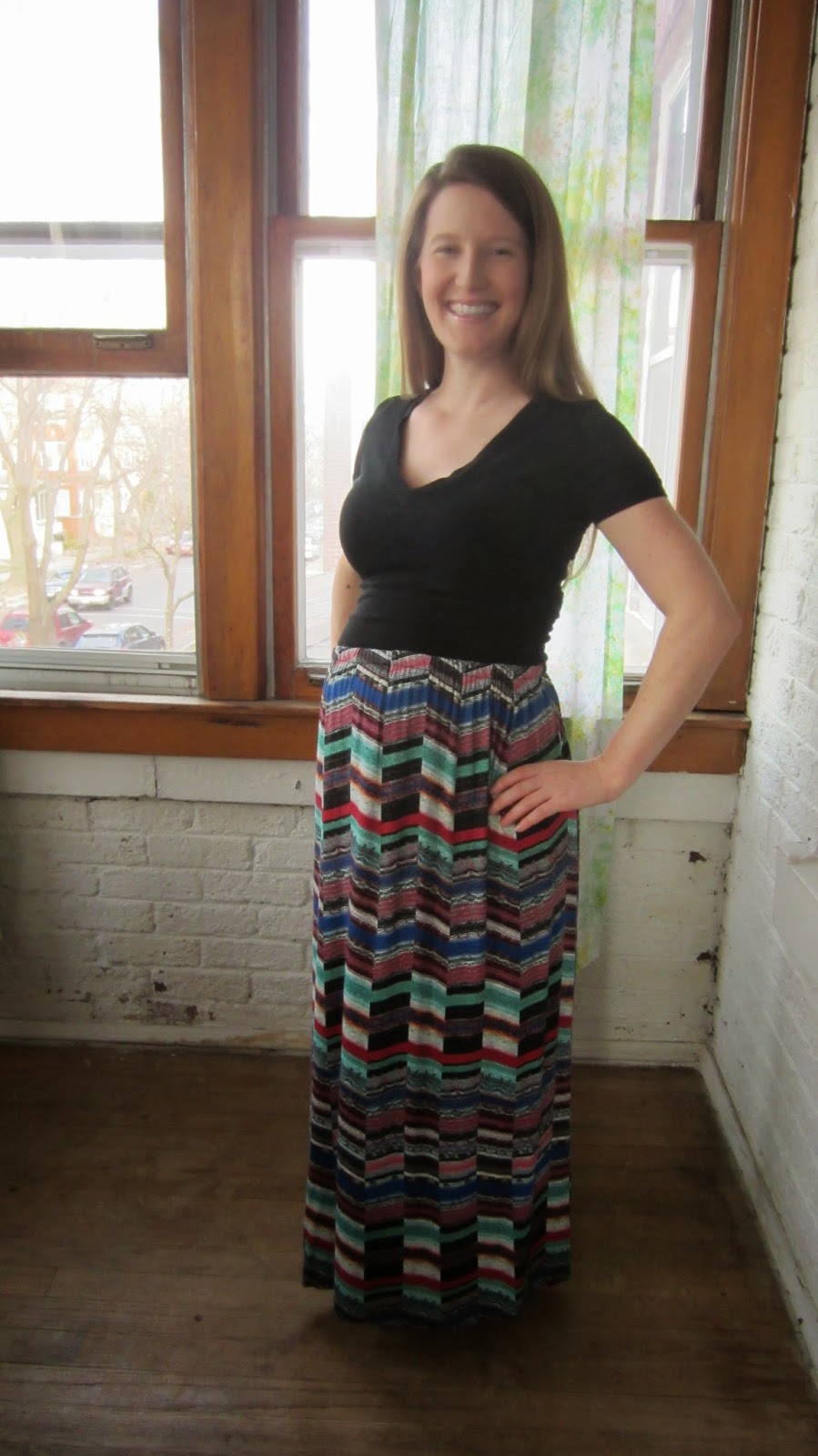 Close-up of the waist: the two rows of elastic are pretty comfortable and they don't twist at all. I used to wear it around my waist, but as that is gone, I just wear it under my boobs. I am all about being comfy! 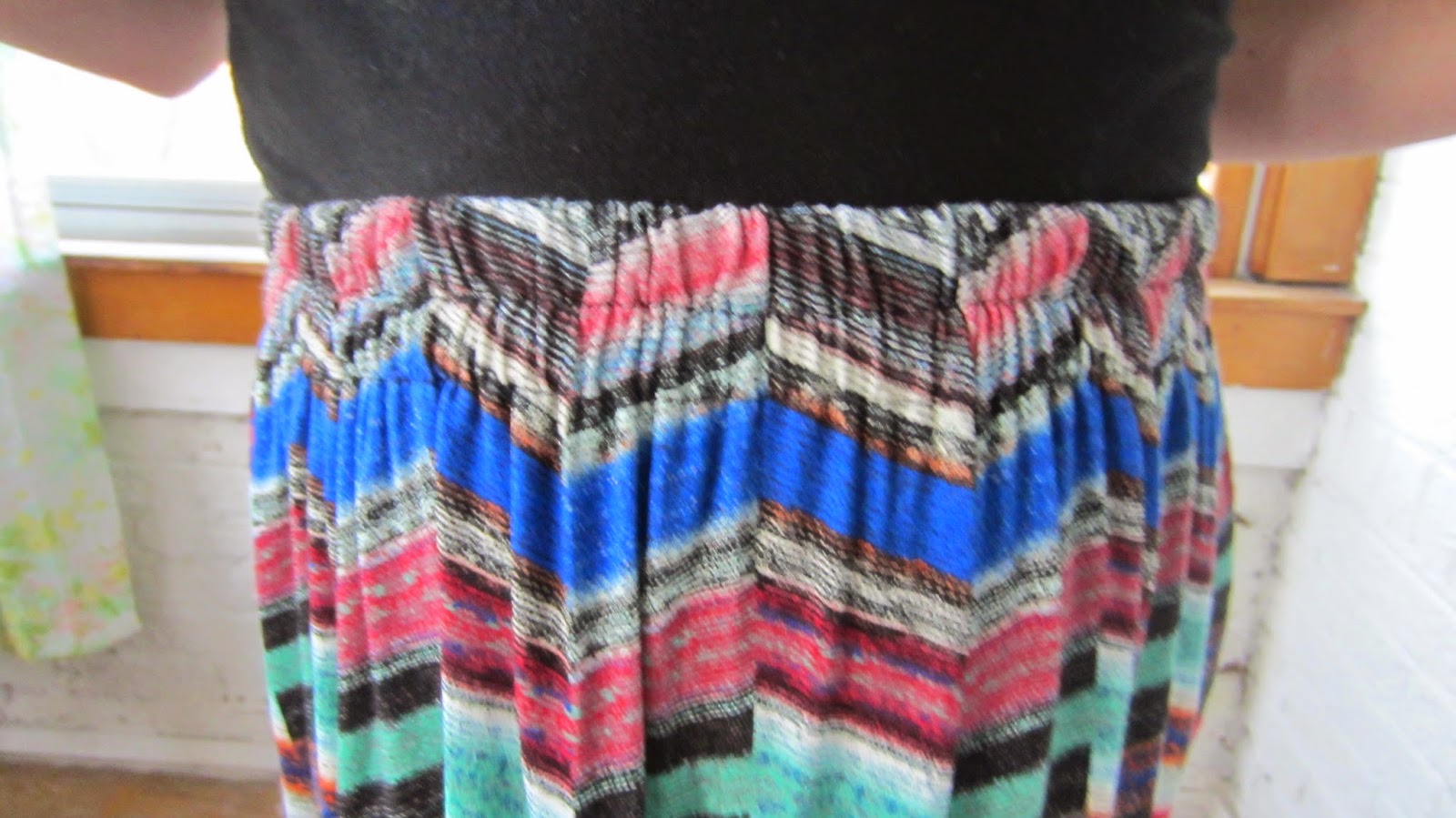 This was a good make- I have two other maxi skirts as well (from Target and Forever 21) and they are working well for being pregnant in the cold weather.

Hope you all had a good Thanksgiving, it was so nice to have a five day weekend!!!
Posted by Molly at 5:40 PM 4 comments: