I made Simplicity 1429, which is for knit skirts and pants. I am now waaaaayyyy to big for all of my pants to fit and I wanted some comfortable knit pants that I could wear to work as well. I bought some chocolate brown knit at Jo-Ann and got this pattern on sale.

I usually wear an 8, so I thought that cutting out a 12 would be a good plan that matches up with my belly. Trolololololololol. Wow, so wrong. They turned out ridiculously, freakishly enormous. In fact, after taking these pictures I had Andrew try them on as a joke and they fit my 6'3" husband. Ha.

Please note: these are the least flattering pictures ever taken. Winter no-light, flash and the most unflattering pants in the world combine to make this look like a diet advertisement. 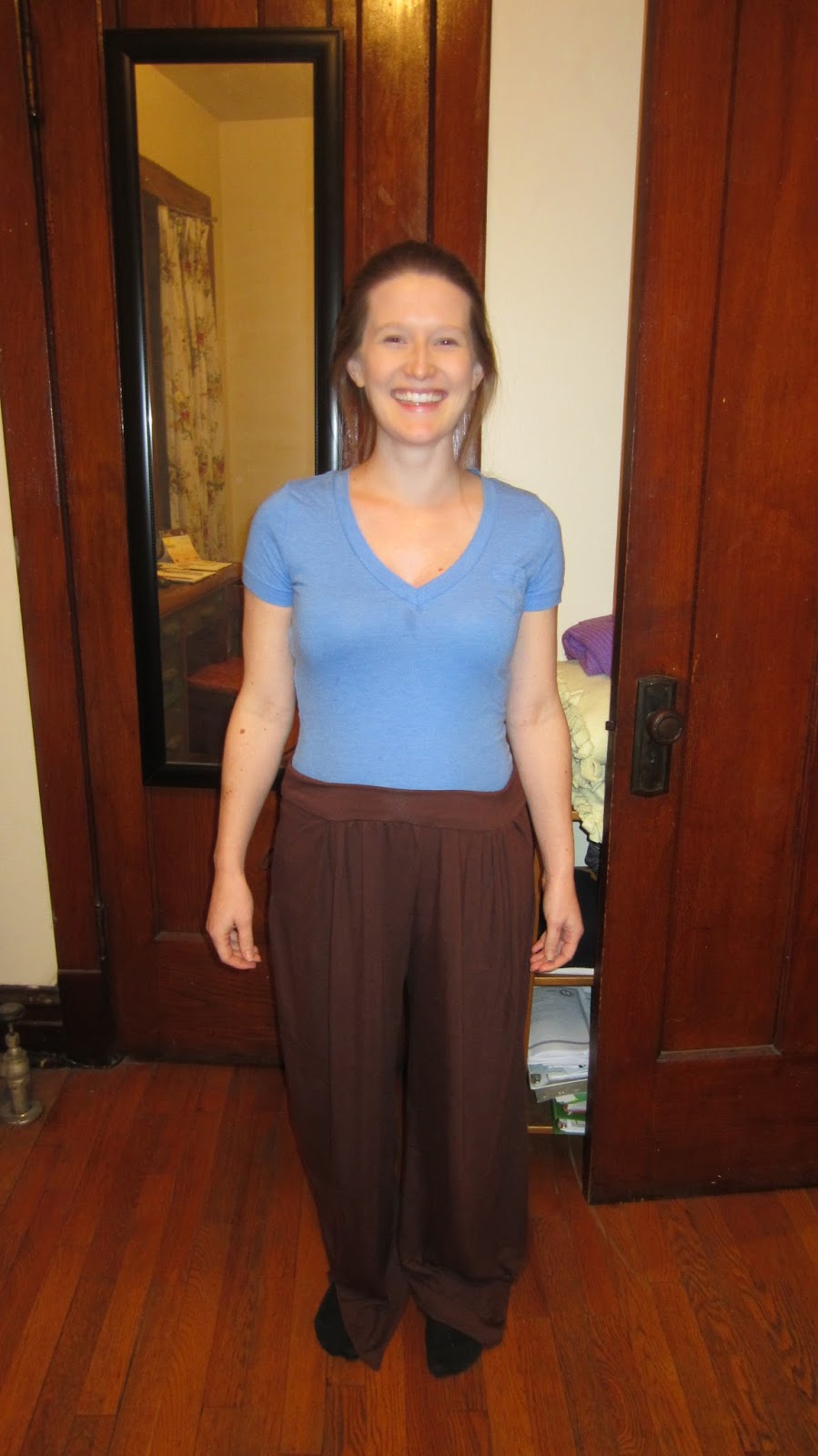 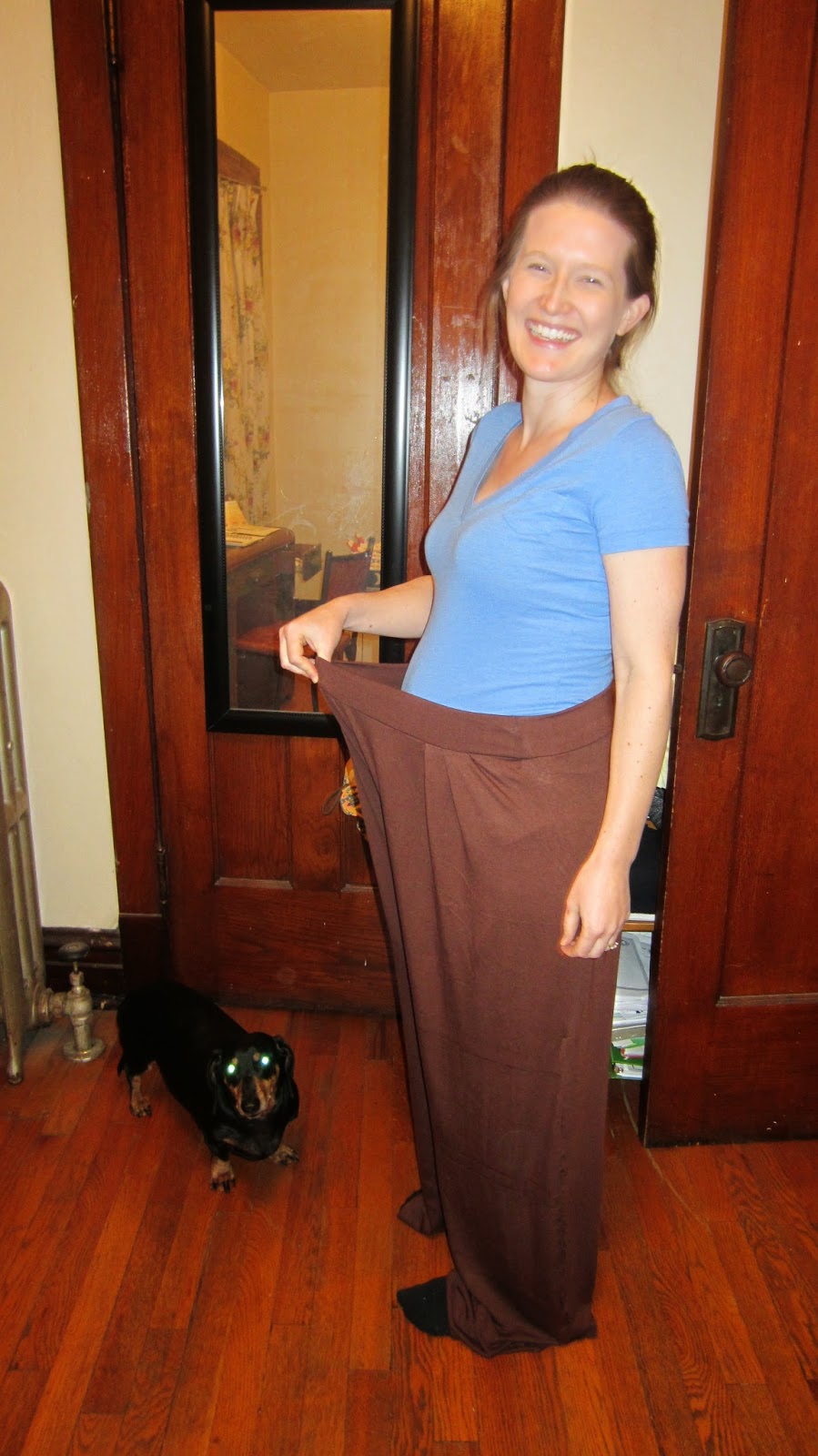 They do not fit on any point of my body, including the belly. 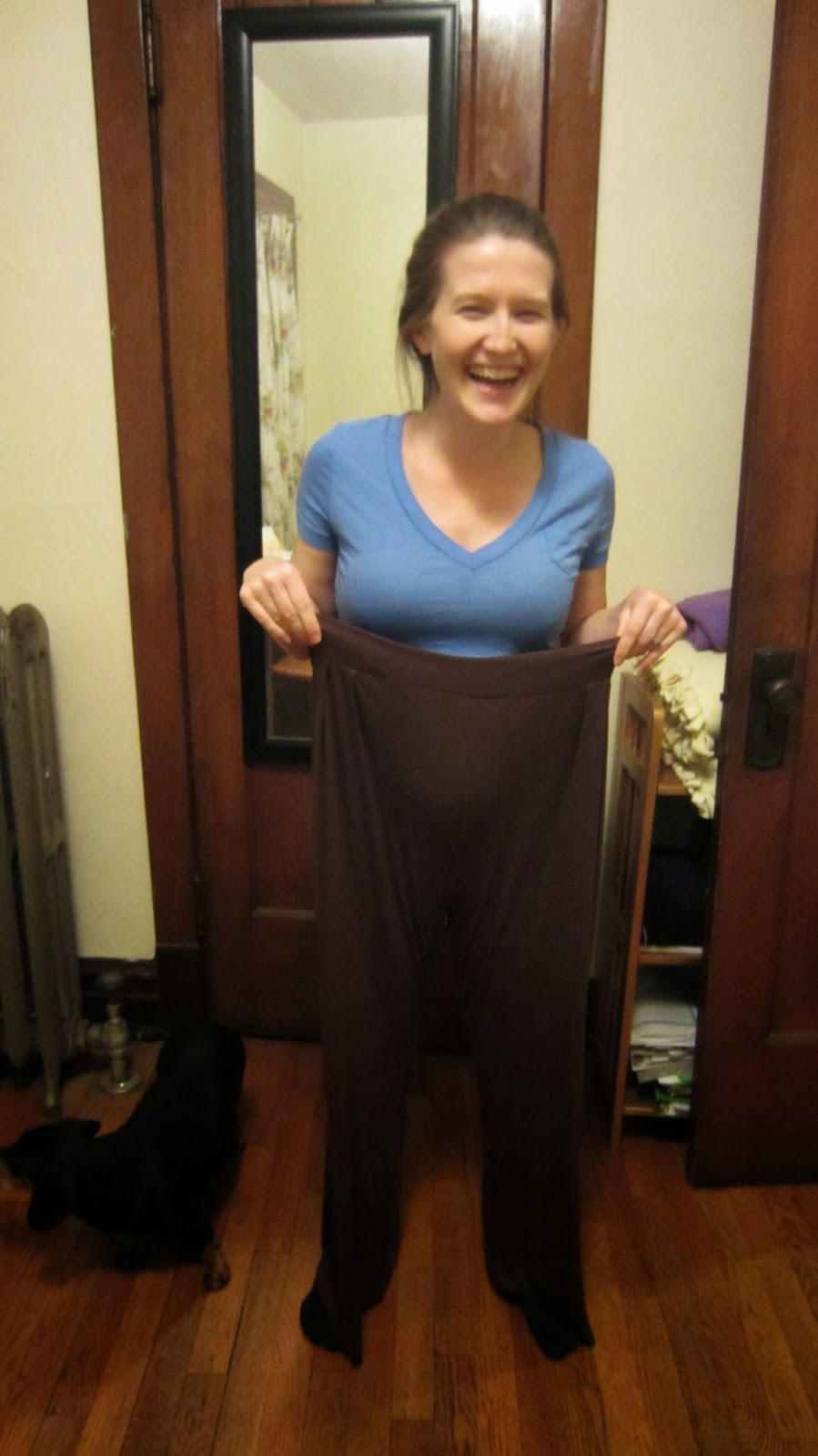 I'm now thinking "pregnant belly dancer" is a Halloween costume I should have considered! 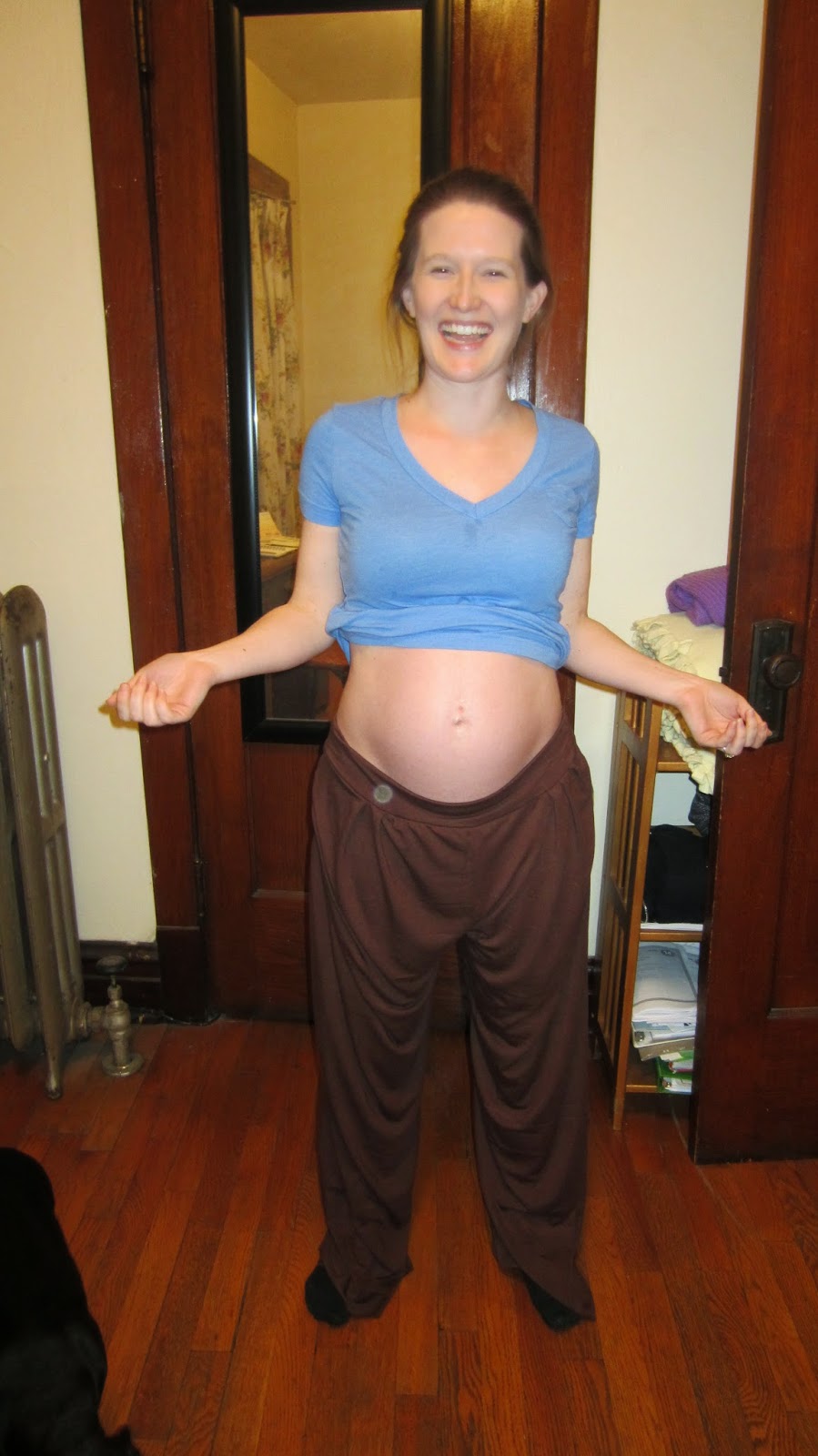 Hope you got a laugh, and I gave them to Andrew as house pants!
Posted by Molly at 4:19 PM 3 comments:

I have made quite a few dog jackets for T-Rex over the years. The first one was red and zebra print and was too small. The second one featured dinosaurs on one side and dog bones on the other and fit better. After moving to Chicago I made one in red, small paw prints and another in plaid, but I guess I never blogged them.

These addressed two problems: the past ones were either too long or too short, and they closed with velcro. In the snow, velcro gets full of snow and stops sticking together. Oh, make that three things: he also wears a harness now so that he doesn't choke himself pulling. The harness hook for his leash is farther back, so the jacket would fall off.
It closes with snaps, which will stay closed in the snow hopefully. However, I had to get Andrew to help me because they were so frustrating! We always joke that putting together IKEA-style furniture is the "divorce-maker" due to the bickering that comes with....but putting in snaps might be on the same level!! Much bickering was had, in part because I got him to help me right after work under the claim that it would take "only ten minutes." Boy was that a gross underestimate.
This food stand at the park always reminds me of Mr. Hanky the Christmas Poo from Southpark. 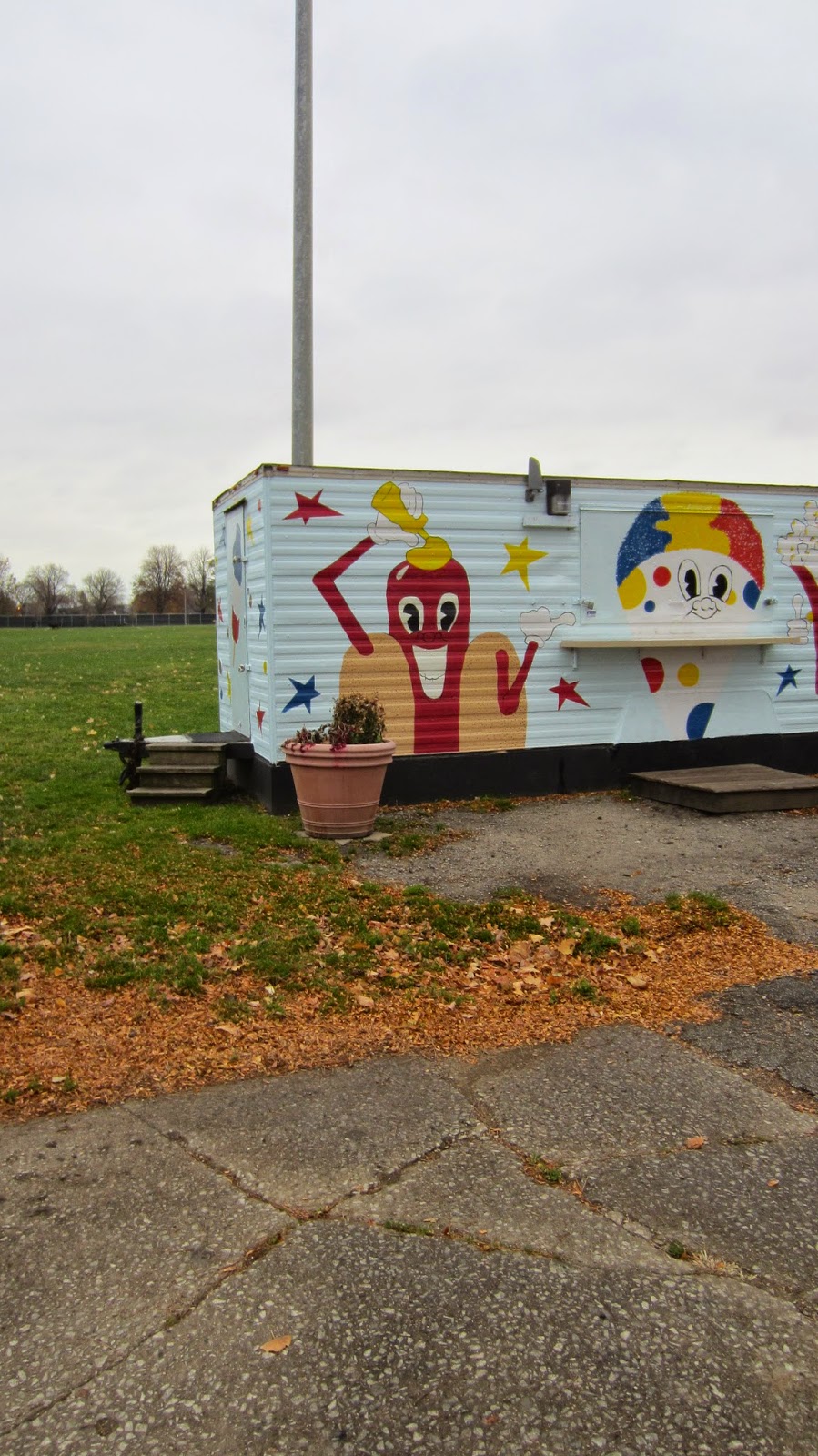 The coat is reversible and the other side has pictures of bacon, hearts and the word bacon. Hee hee. 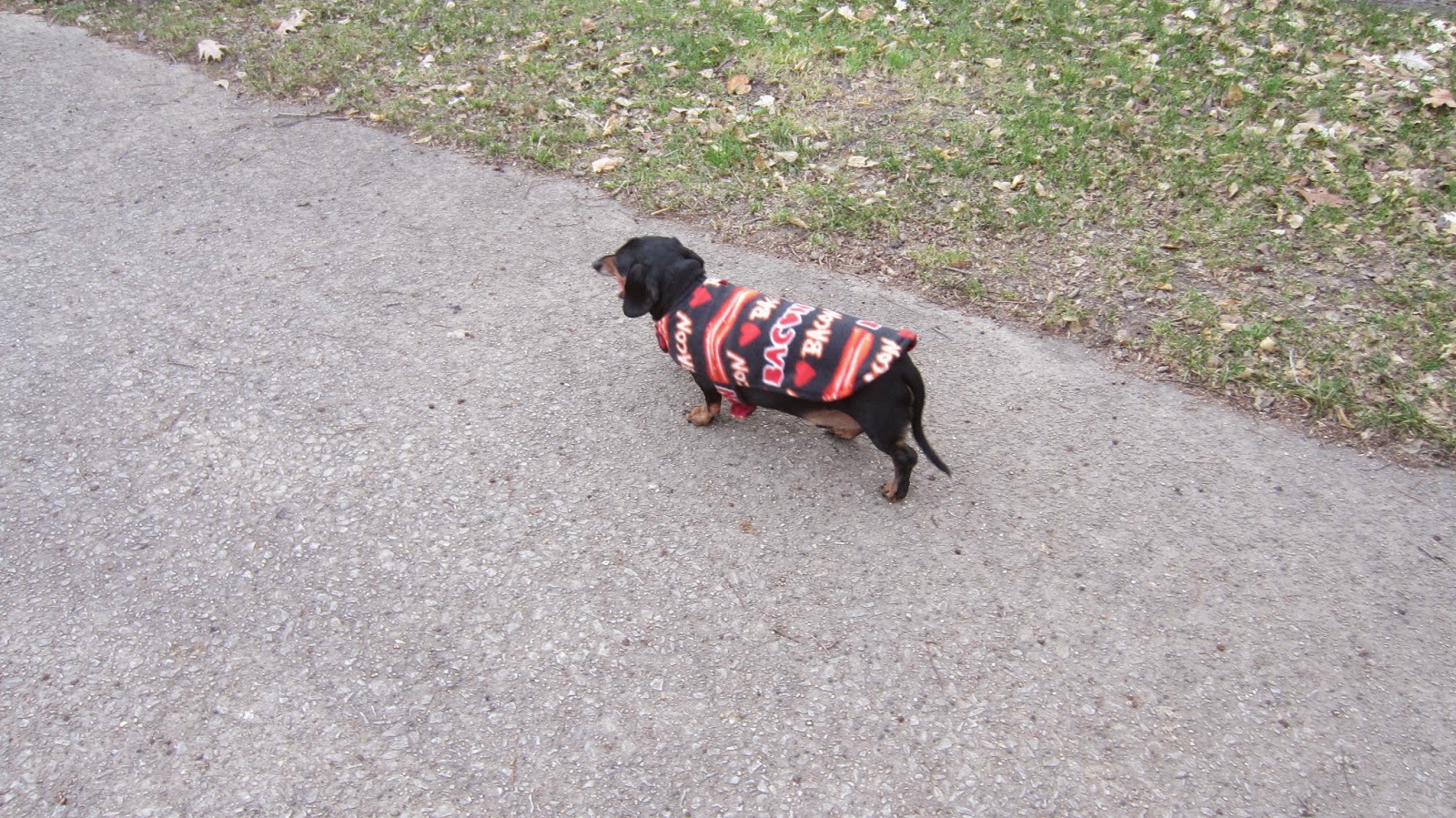 And to close, a scandalously naked T-Rex laying on his sheepskin in front of the fire radiator. 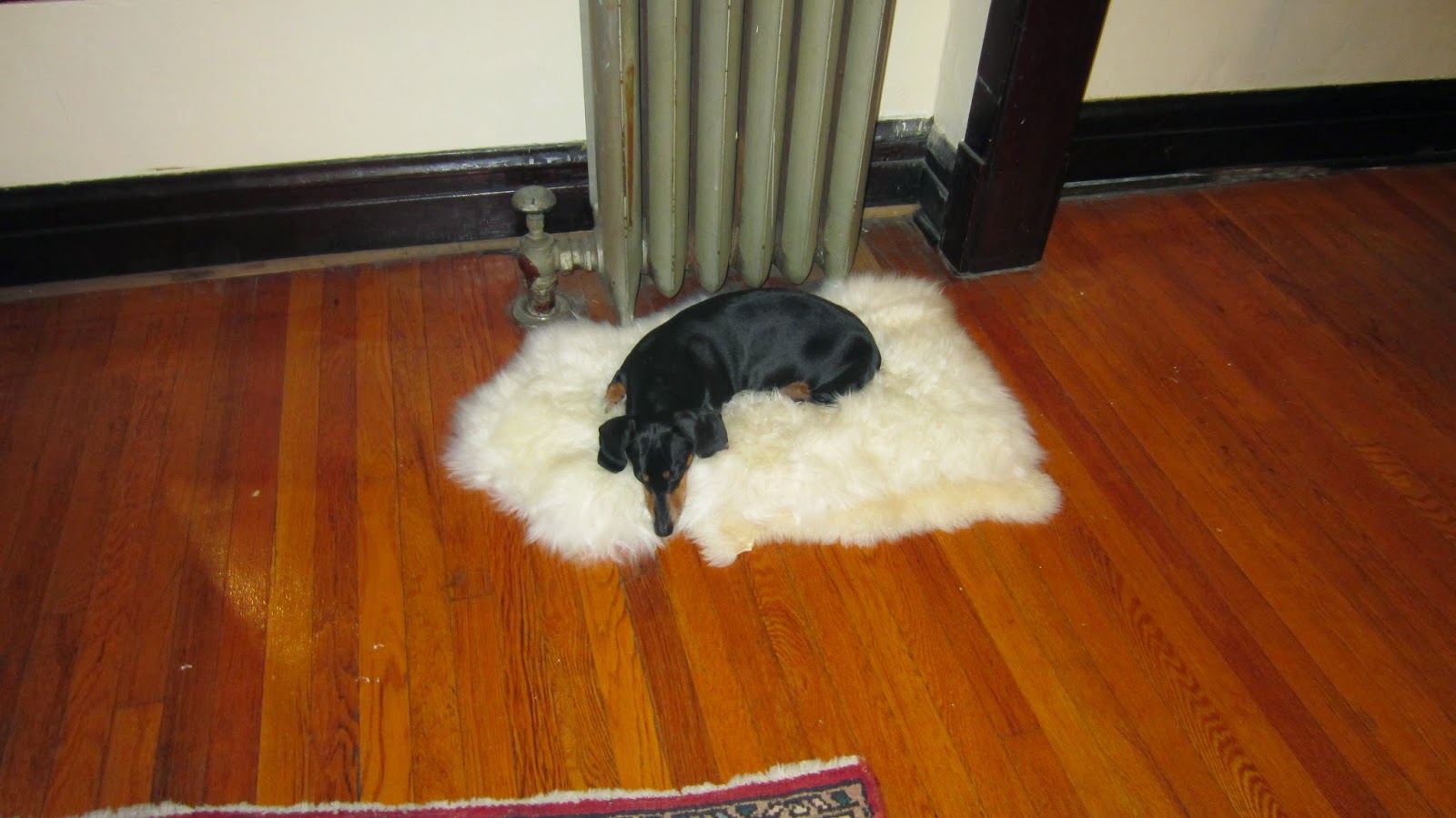 I am back to having two classes online and working full-time as a long-term substitute for art, but I do have some good (and awful) things to post! It is just dark after work and there is no good light in my house...or uncluttered surfaces that are not too embarrassing for a background.
Posted by Molly at 6:27 PM 5 comments:

I helped with the school haunted house this year and that made me excited about making a costume.

In late September, I googled pregnant Halloween costumes and they were the WORST. No offense to you if you have done any of the following, but they are terrible: painting your stomach like a basketball, watermelon or pumpkin; wearing black and painting a baby skeleton on your stomach; gluing doll arms to your stomach like your baby is a zombie; etc etc etc.

Bleh. So then I was thinking about Game of Thrones/ASOIAF characters and how many Daenerys and Cersei costumes I had already seen online. That made me think of Melisandre, the red witch/priestess of R'hollor. I don't particularly like her character that much, but I thought it would be easy to make and she even is "pregnant" at one point with the Shadow Baby that then goes and kills Renly. Perfect!

I used this vintage pattern, Simplicity 5967. It is for a bust 38 which is still laughably big, so I made it as is and then just made crazy alterations as I went. 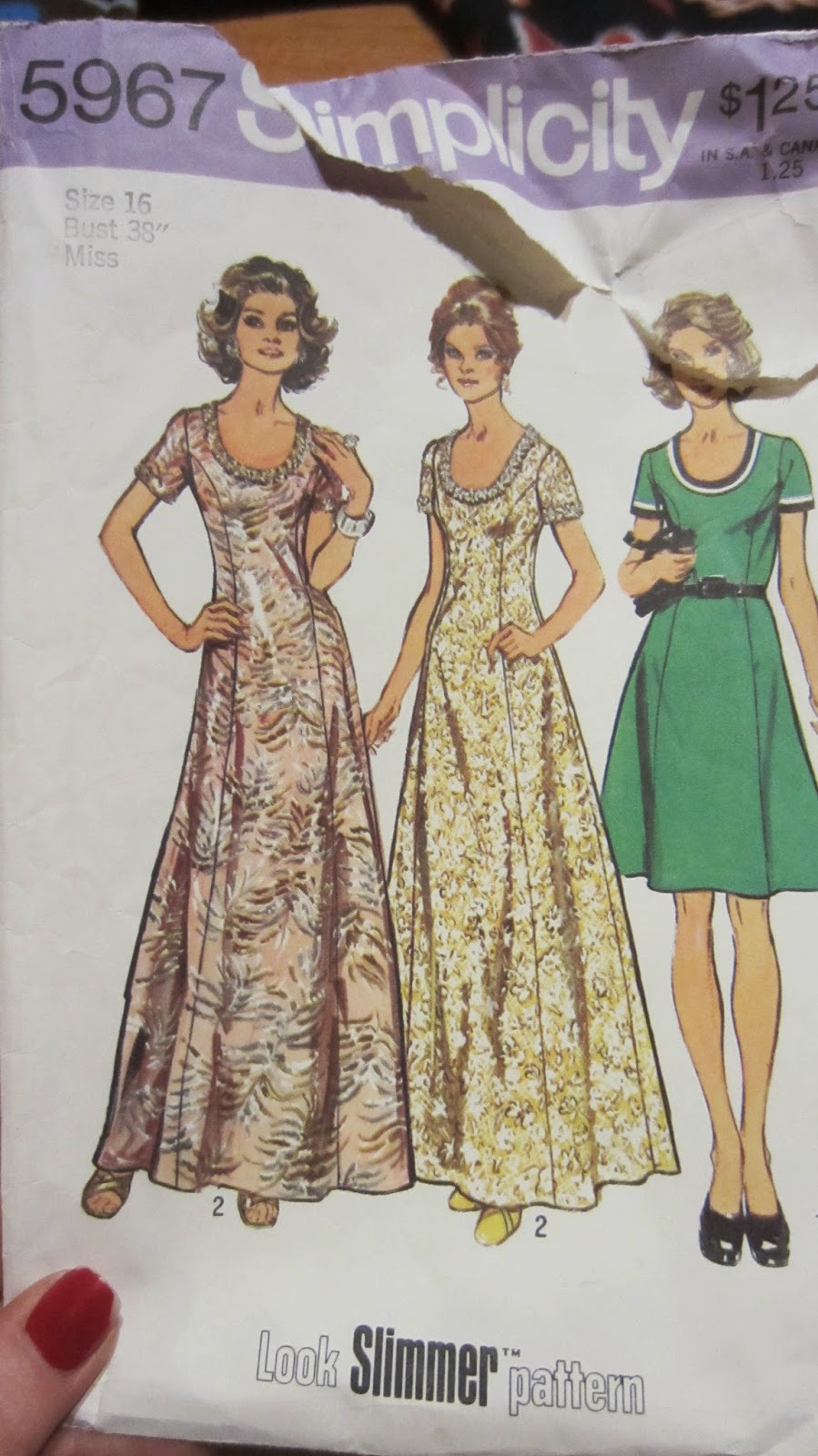 Pictures of Melisandre from the show: here.

She always has her red jewel necklace on, so I made one out of craft rhinestones and fake gold leather- plus my trusty old hot glue gun, which I accidentally left plugged in OVERNIGHT and it somehow did not burn down the house!
I bought a long, curly red wig online. It unfortunately had bangs, but what can you do? It was at least closer to burgundy or maroon than Ronald McDonald red. It was surprisingly not itchy or that hot.
I made the dress out of dark red, cheap polyester knit from JoAnn that was also on sale. I changed the sleeves to be full length and bell out at the ends. I wore it with my cheap red flats from Target, et voila, my costume! I ended up taking in the side seams a ton, the shoulder seams, trimming the sleeve heads and shortening the skirt. It is pretty shoddily made, but it's a Halloween costume!!! 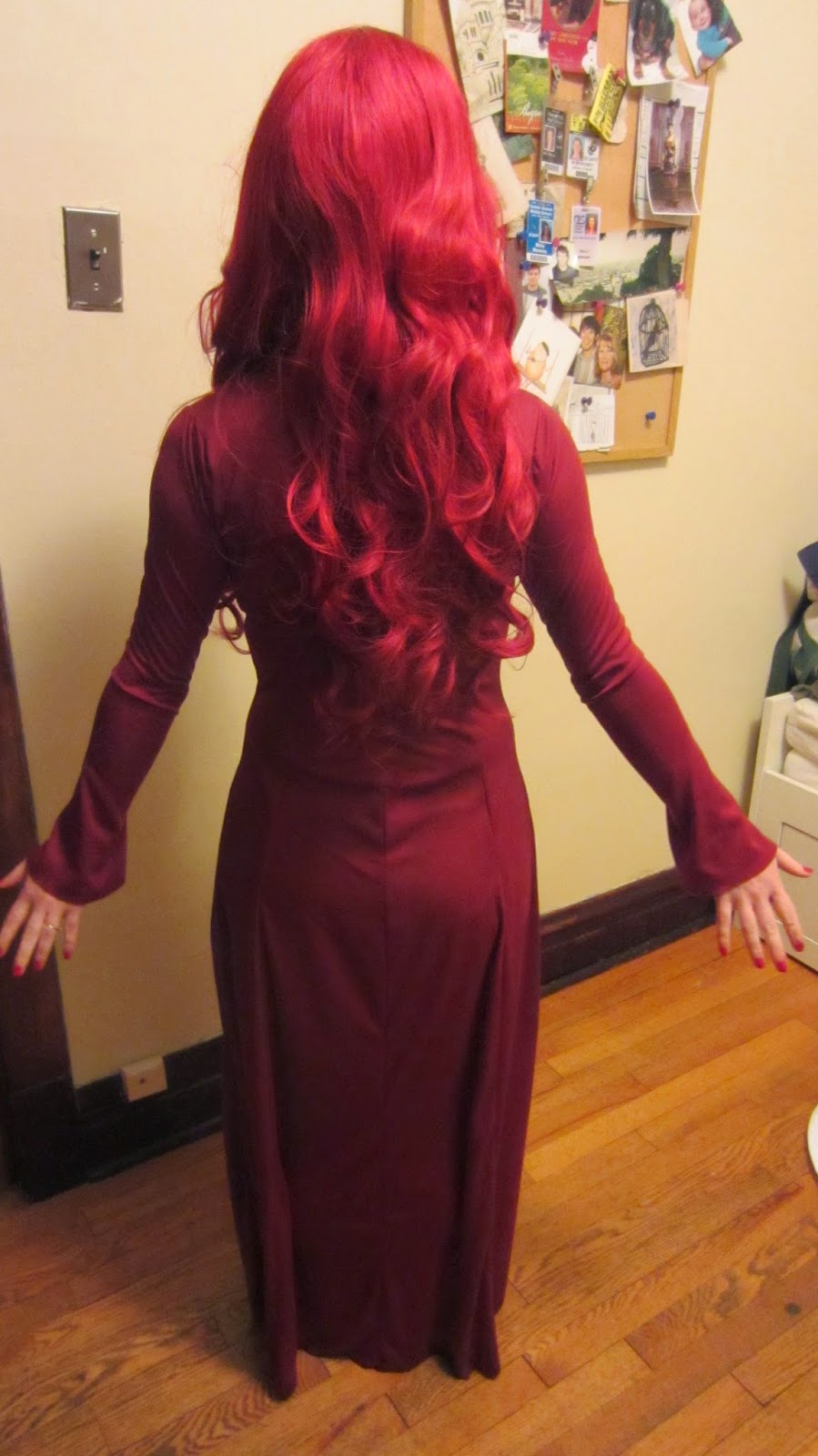 I wore it for the two days of the haunted house at school and it was fun. People liked it and it was both comfortable and warm. Sadly I did not wear it on Halloween itself because Chicago decided to be freezing cold, rainy, snow intermittently (!!!!) and have a high wind advisory. The weather was absolutely miserable and there were hardly any Trick or Treaters! Sad...

I will never use this pattern again because it was so big, so I think it will be part of the next giveaway!
Posted by Molly at 5:31 PM 4 comments:

I made this dress well over a month ago and then it took forever to find three minutes to take pictures of it. I just finished two online classes and I forgot how incredibly time consuming they are! Right now I get a break between these ending and the next two starting, so I plan on sewing a TON!

This is a New Look pattern (6391)I bought at Jo-Ann fabrics because it was cheap. When I made it about six weeks ago, I was just on the point where most of my old clothes did not fit anymore. I wanted to find some patterns with room to expand, so this mock wrap dress seemed like a good candidate. 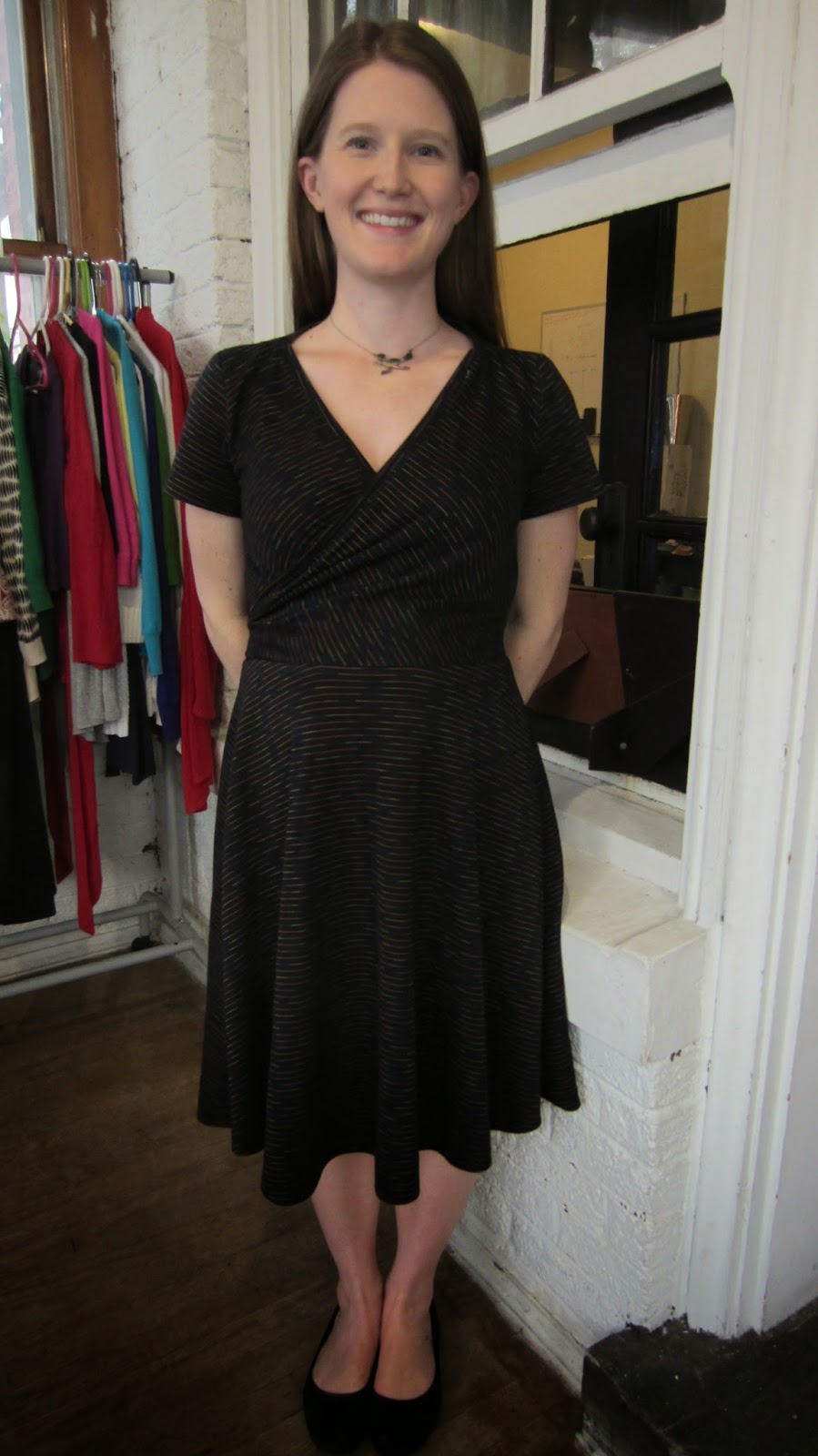 The fabric is a black knit from Jo-Ann that has very thin neon stripes. It is in fact reversible, which is two very thin knits that are somehow magically fused together. The other side is mostly black with tiny pinpoint dots, so I didn't use that. The two layers makes it nicely heavy and have a good drape. 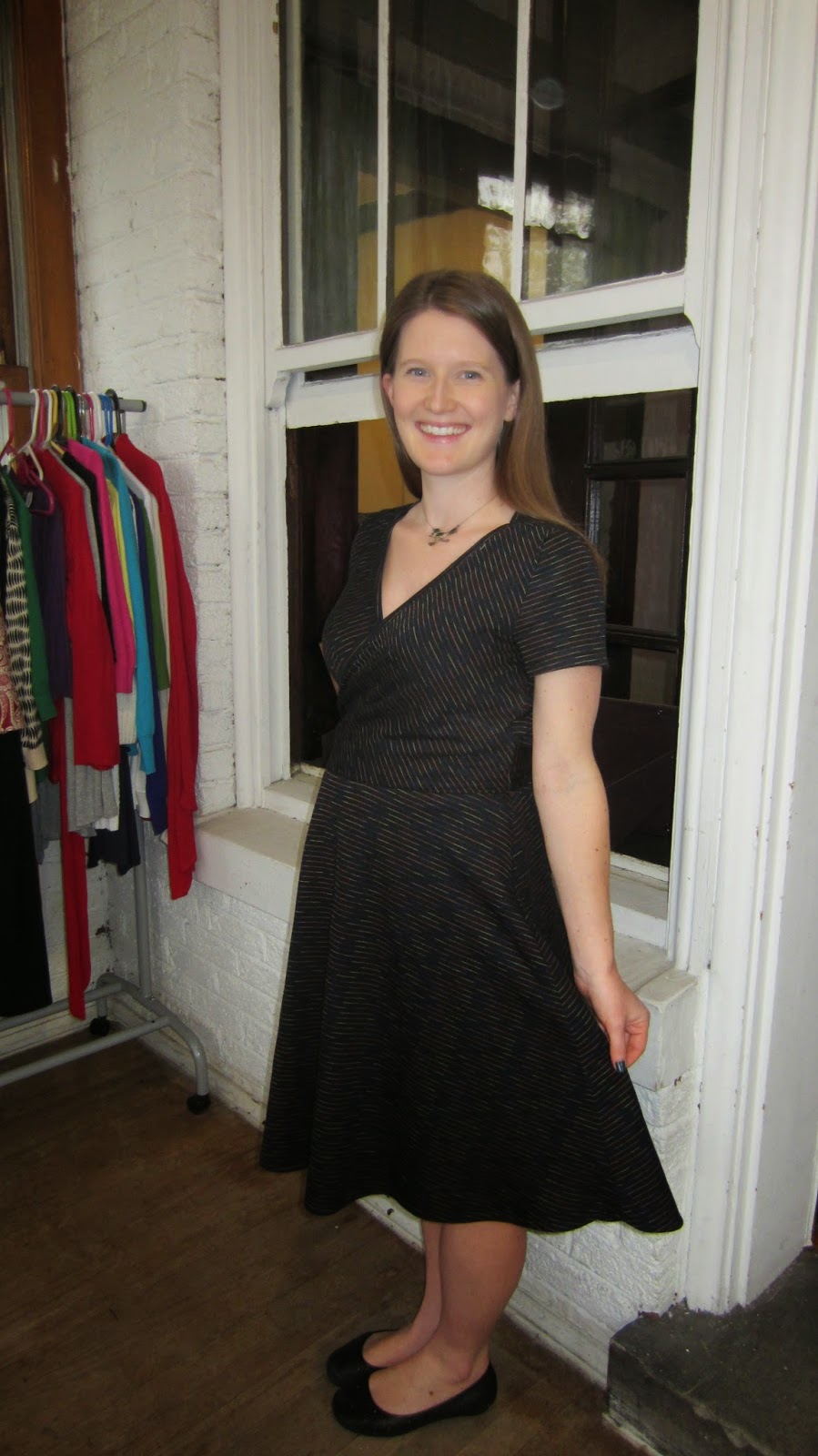 I left the skirt a little longer than I normally do, so that as my stomach gets bigger and the front rises a little, it won't be too short. 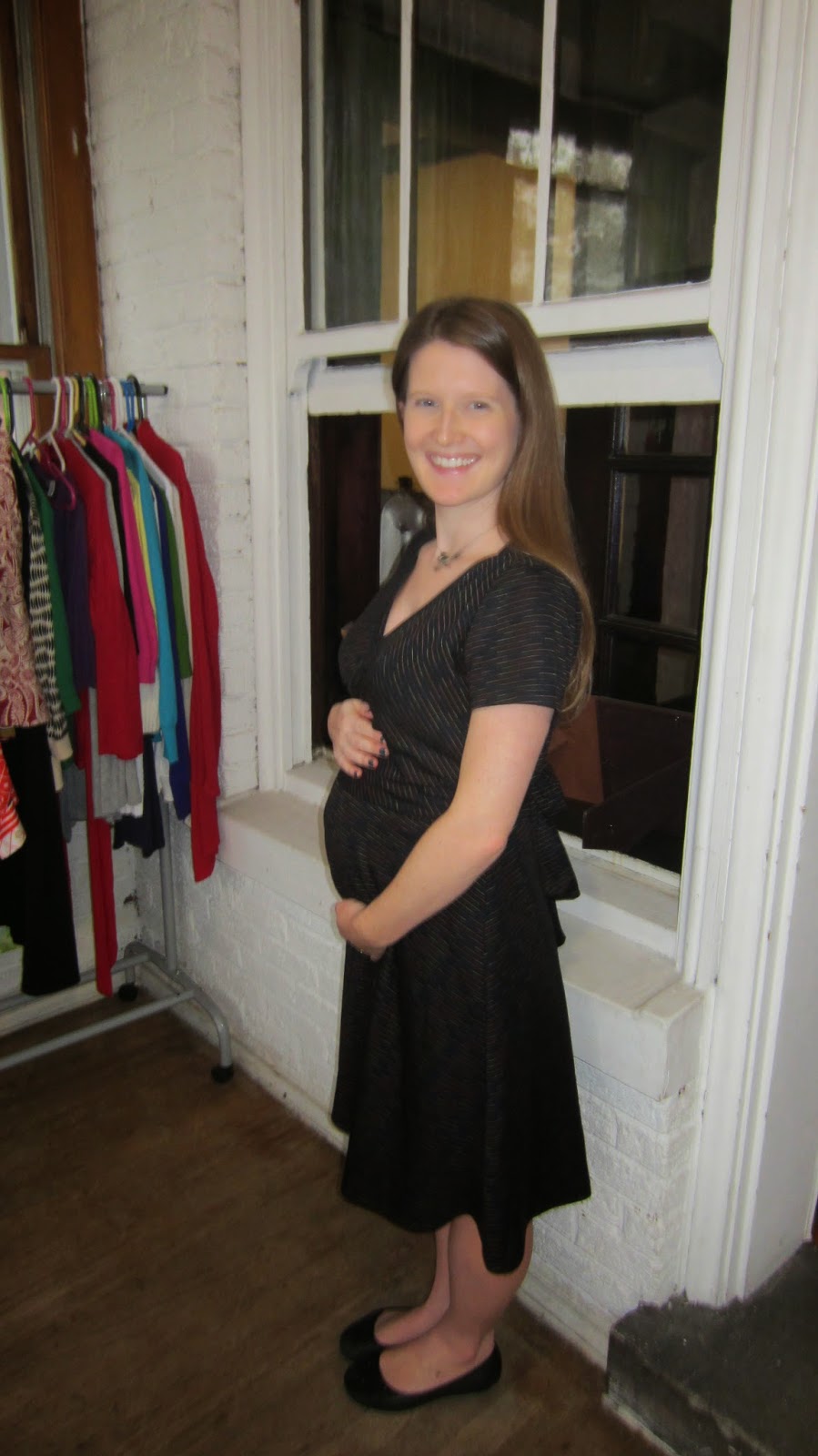 My expanding baby! We found a few weeks ago that we are having a boy! I am so excited! 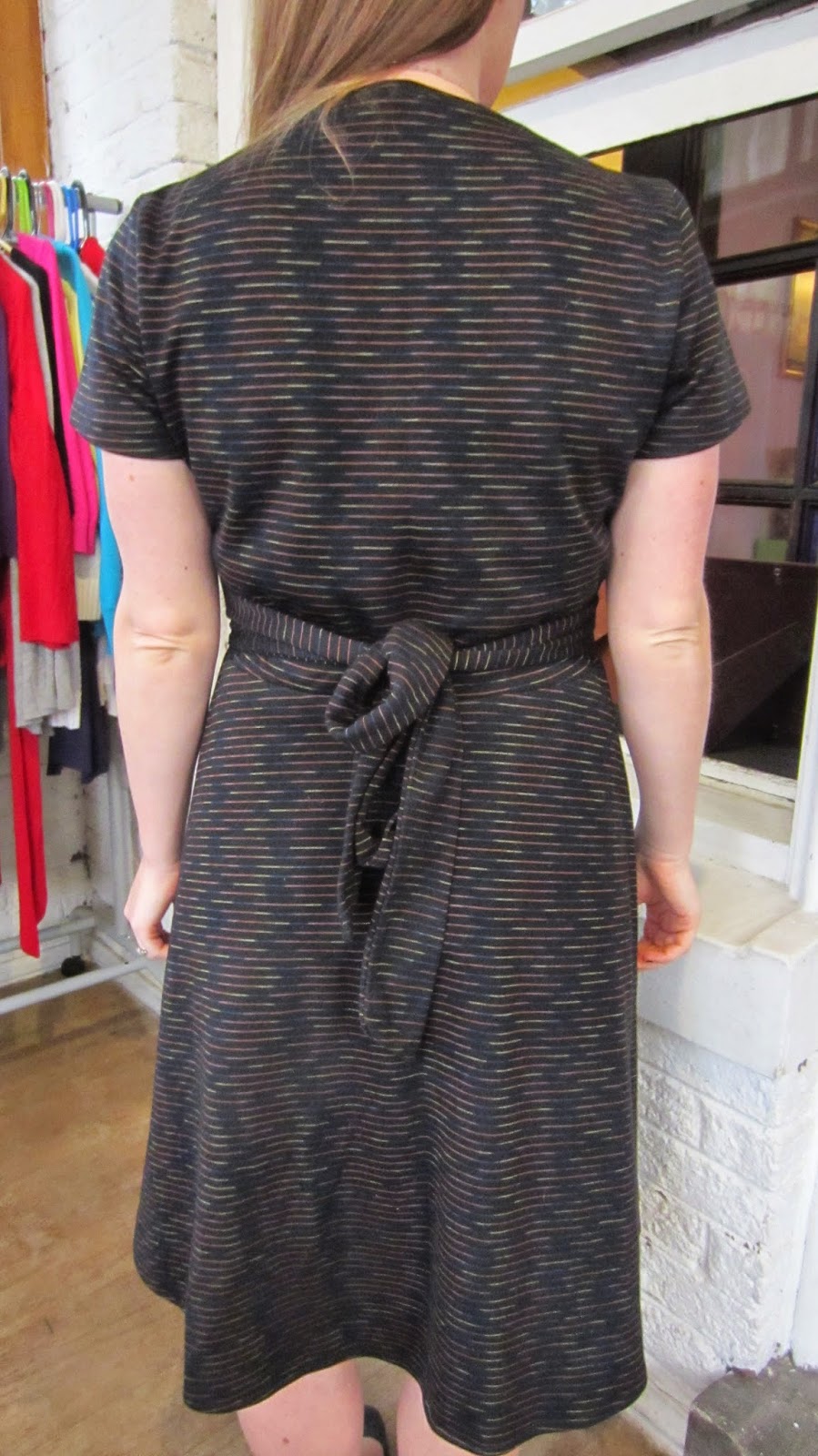 It has ties set in the side seams that you can tie in the front or the back. I've got enough going on in front, so I tie it in the back. 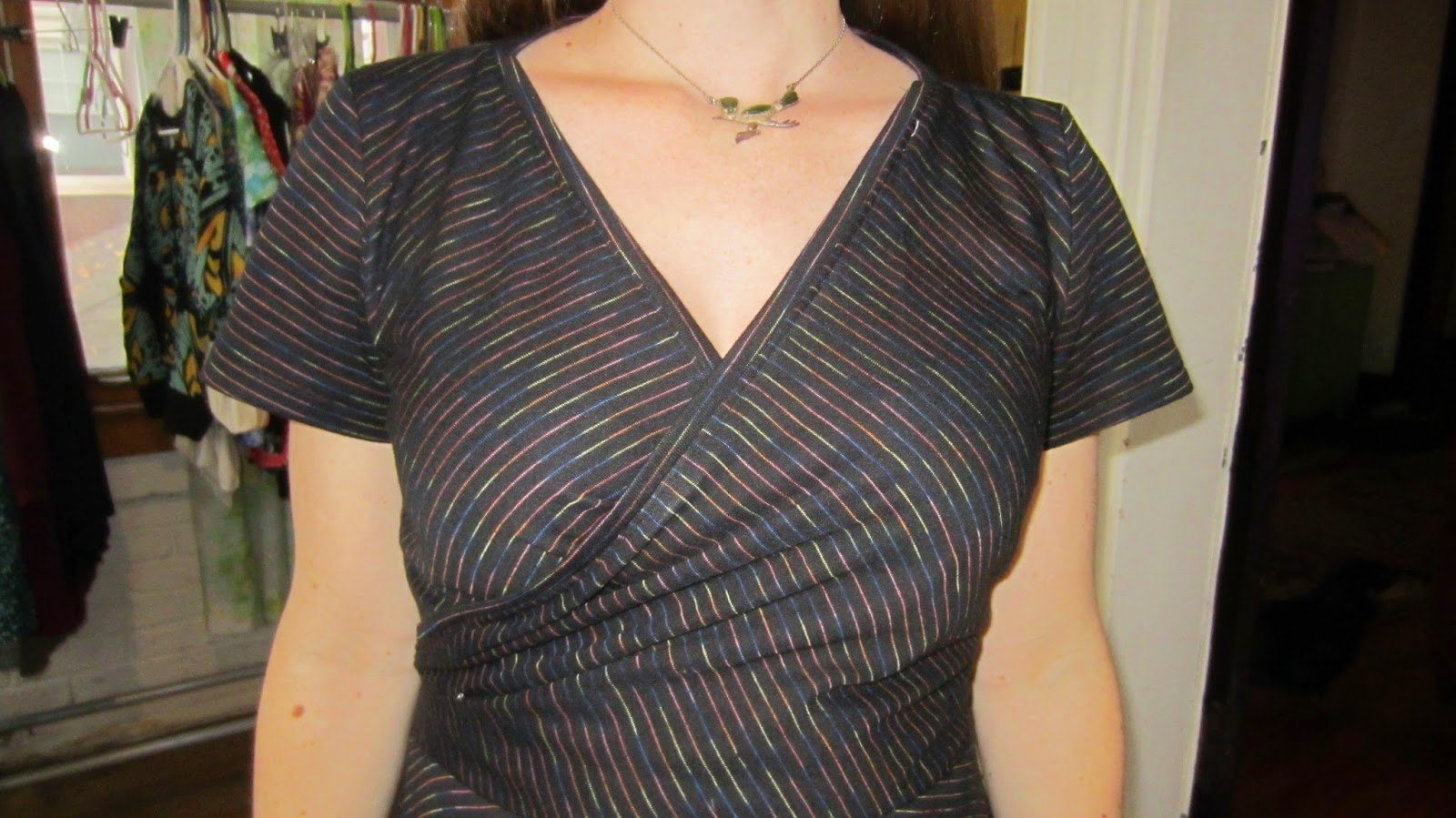 I usually wear an 8, but I made this in a 12 to account for my new boobs and stomach. However, that made the shoulders way too big. I wore it a few times like that, but I had to wear a tank top under it because it was too low-cut and it would slide off my collarbones and looked sloppy.

I decided to take a V shaped pinch out of the shoulder seams towards the neckline. That really tightened up the gaping neckline, but the it made the sleeves have weird points on the top. Then I rounded out the sleeve heads and trimmed it and it is SO MUCH better! Now I can wear it comfortably, without gaping open or slipping around, and without a tank top underneath!

It is a super easy pattern and cheap, so if you want a mock wrap dress, I would consider picking it up.
Posted by Molly at 5:47 PM 10 comments: