This was my final project for January, which I am just getting around to posting. I still haven't worn it because I don't like it very much. I saw another teacher wearing a cute wool skirt with a sort of scalloped hem and I decided I would try to make a similar skirt. I had extra wool from my coat and lining and a zipper, so I whipped it together in a day or two. Then I put it on and was disappointed. 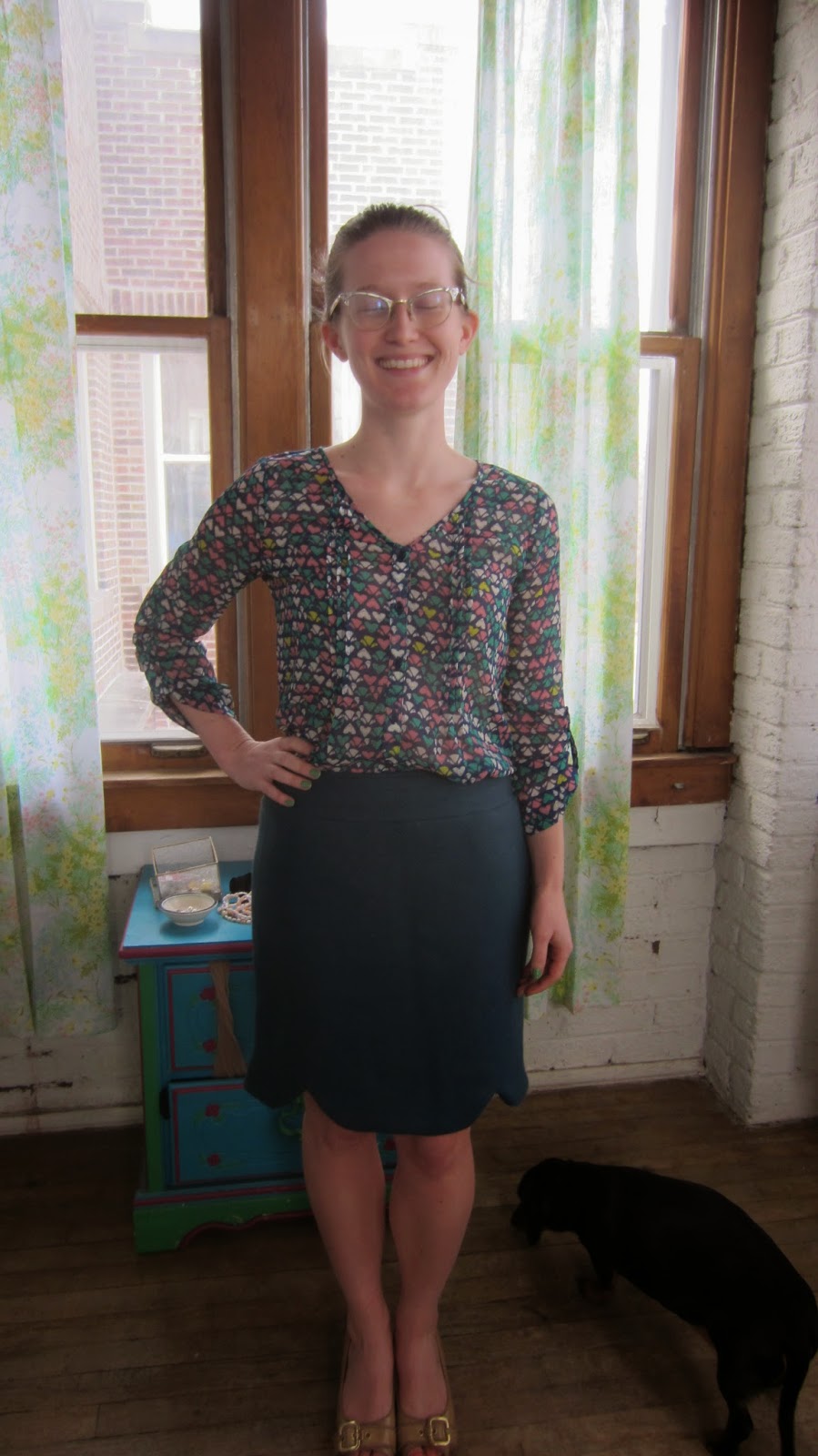 I did not even attempt to look nice for these pictures. The blouse and heels do make it look better than in person.
The zipper pulls apart a little bit. 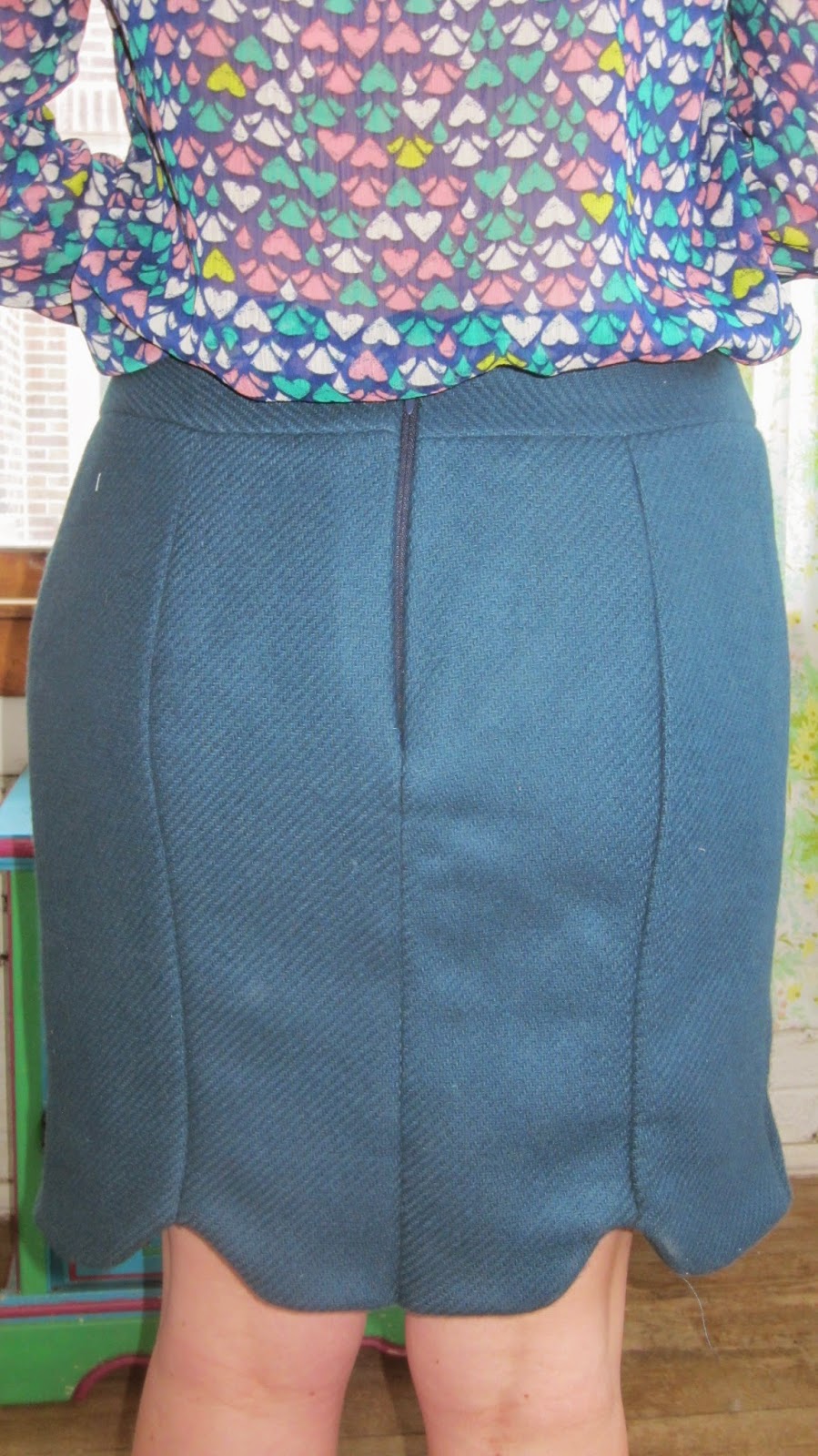 The scallops are too bulky and somewhat uneven. 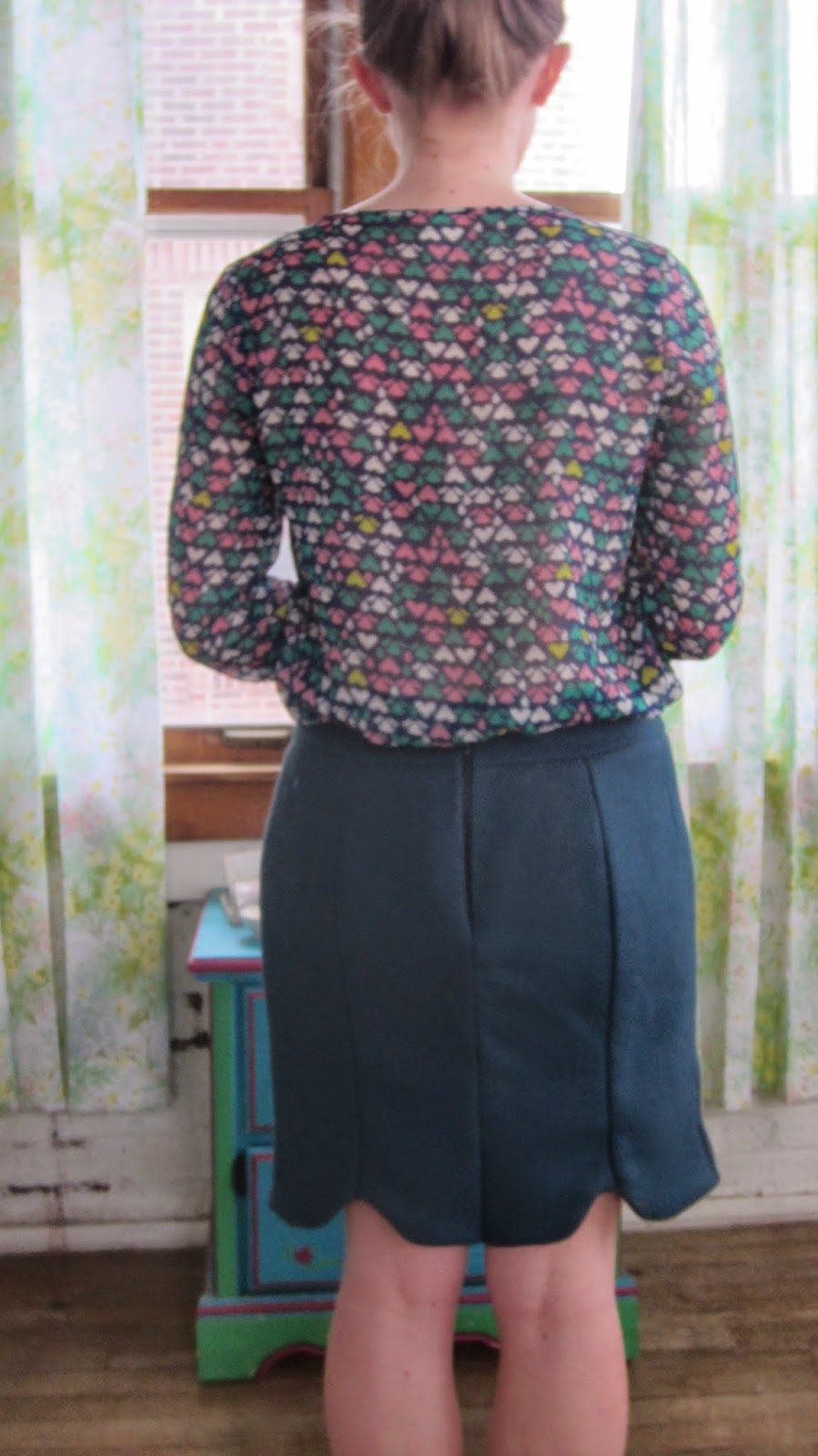 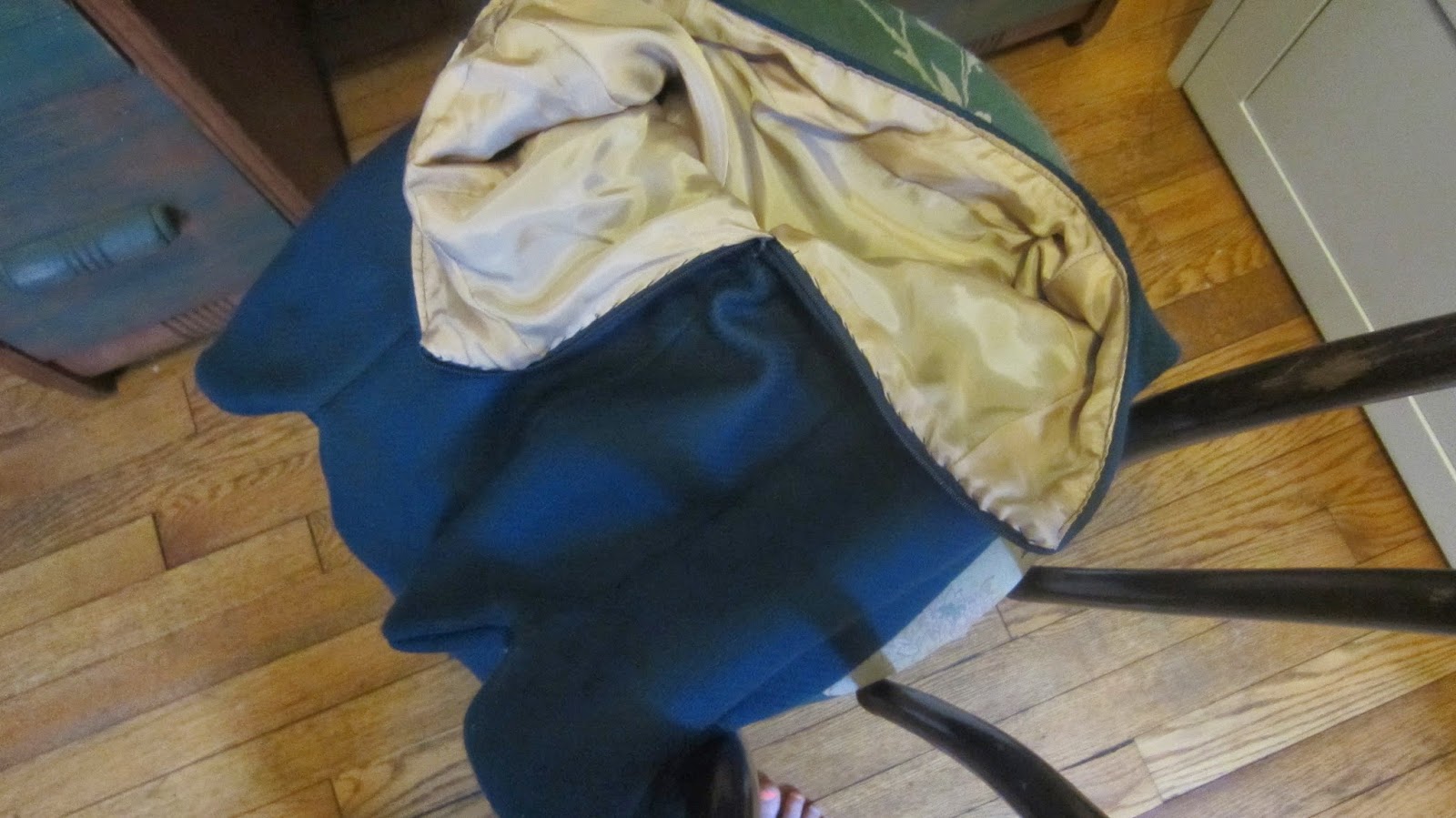 Bleh, I may as well put it in the giveaway bag now because I know I will never wear it.

And...I sewed nothing in March! Hopefully April will be more productive. It seems like (knock on wood) our endless winter might be coming to an end, and that would make me want to sew some cute Spring dresses and such!
Posted by Molly at 6:11 PM 3 comments:

I wore my second Mission Maxi several times on the trip and it was perfect! On our last day in Puerto Rico, we had time before our flight to walk around old San Juan. Andrew took these pictures at both of the forts. It was so sunny and hot that I ended up walking around with it hitched up to my knees.

This dress is the same size as the green one, but it looks less suggestive because the knit is thicker. I bought the fabric at JoAnn at the end of last summer. I had been eyeing it for most of the summer, but they priced it at something like 29.99 a yard, which is absurd for a knit! So the bolt lasted until the end of summer, unsurprisingly. I bought a yard and a half on sale for 30 or 40 percent off. So not any cheaper than buying a dress, but the print is absolutely beautiful. Looks like they still have some here. It's shades of blue and green and reminds me of fish or a lagoon or something. 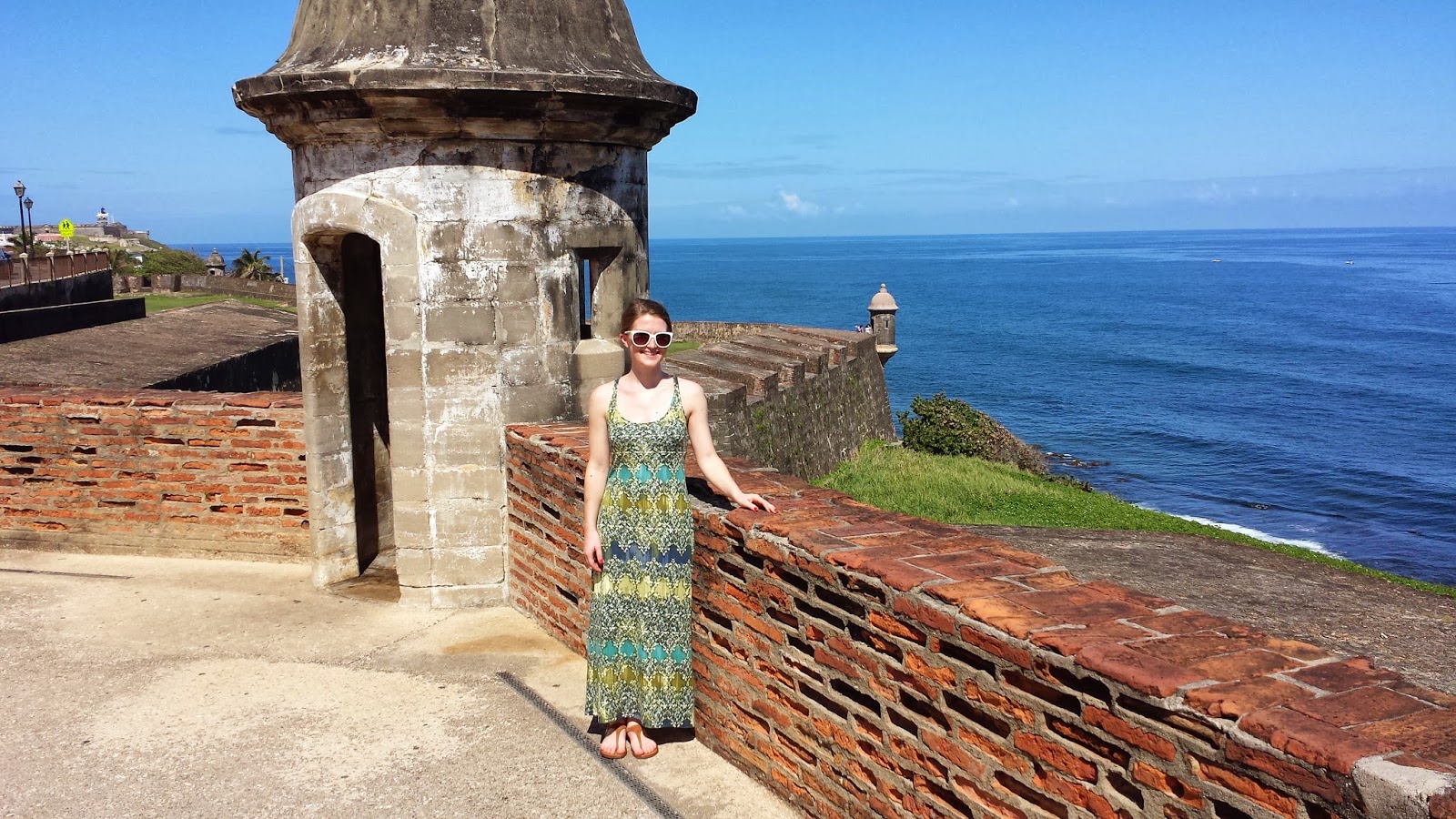 I keep thinking the waist could be a little tighter, but I don't need to look like a sausage... I did lose five lbs on my "get ready for Puerto Rico diet" which consisted of the shocking ideas of drinking less beer and eating less food. Maybe slipping and sliding and trudging through the snow every day helped too. Thanks, Winter! 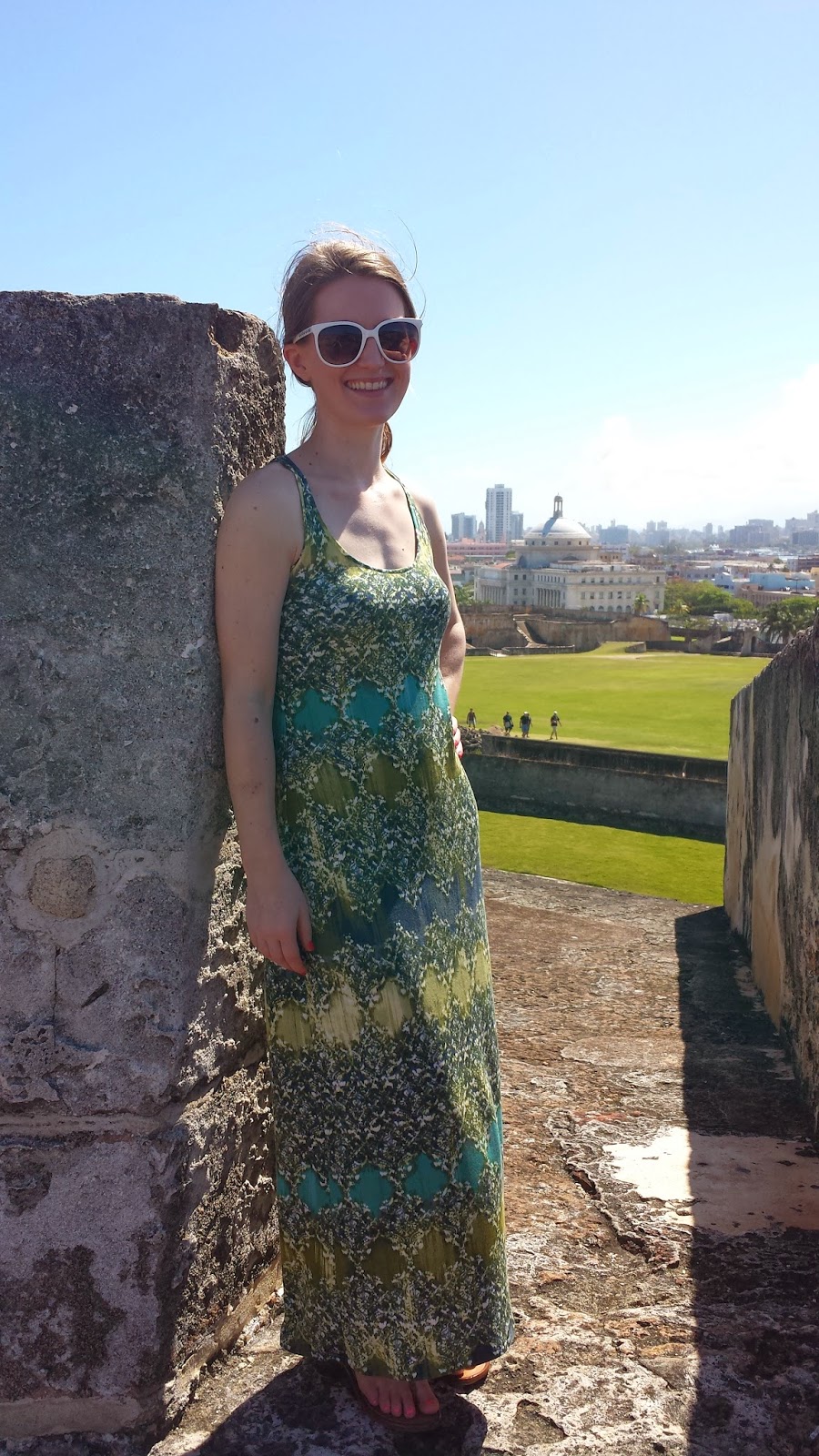 I am super happy with this version. I will probably make forty more, so get ready! 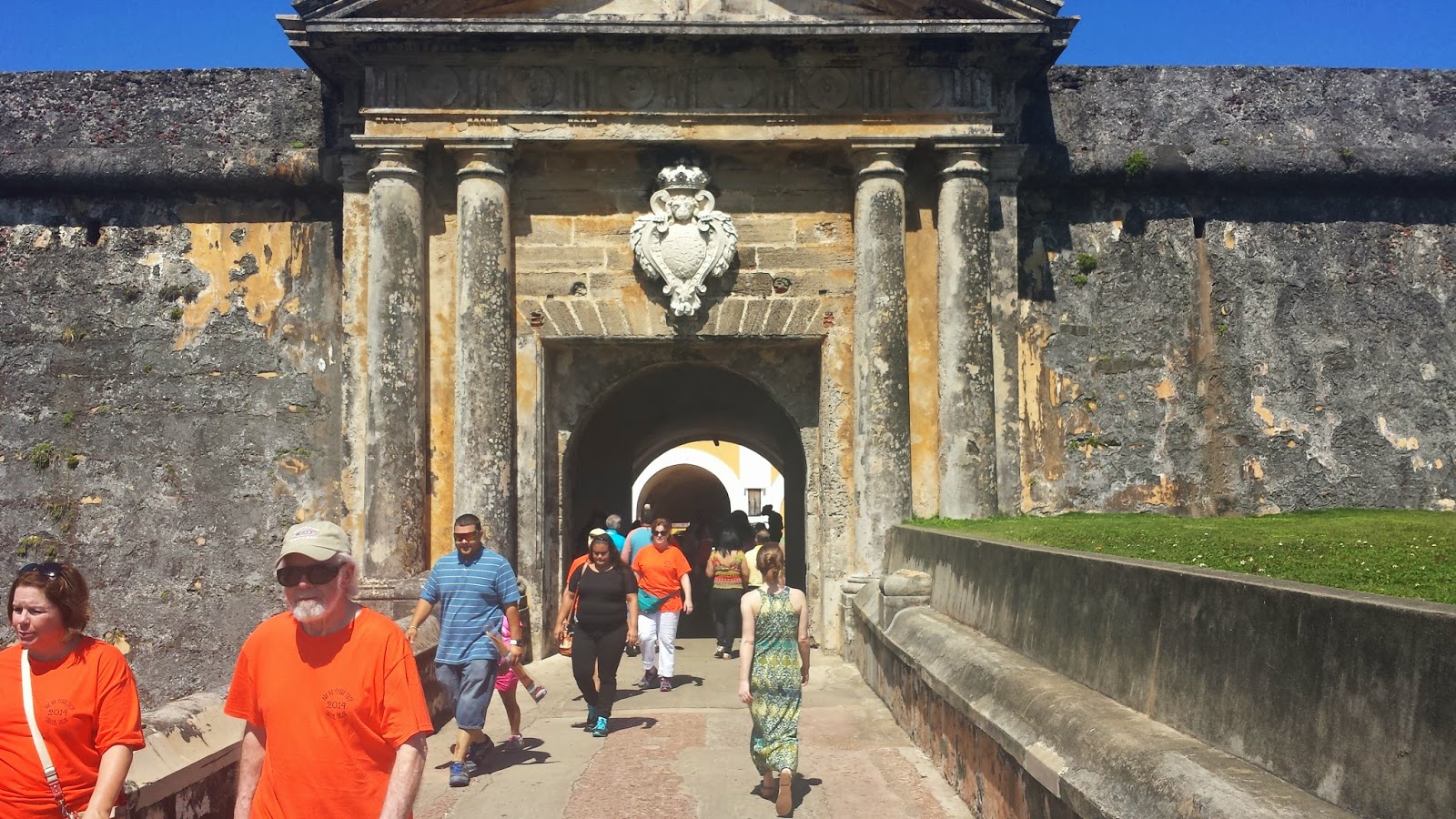 You can sort of see the back above. 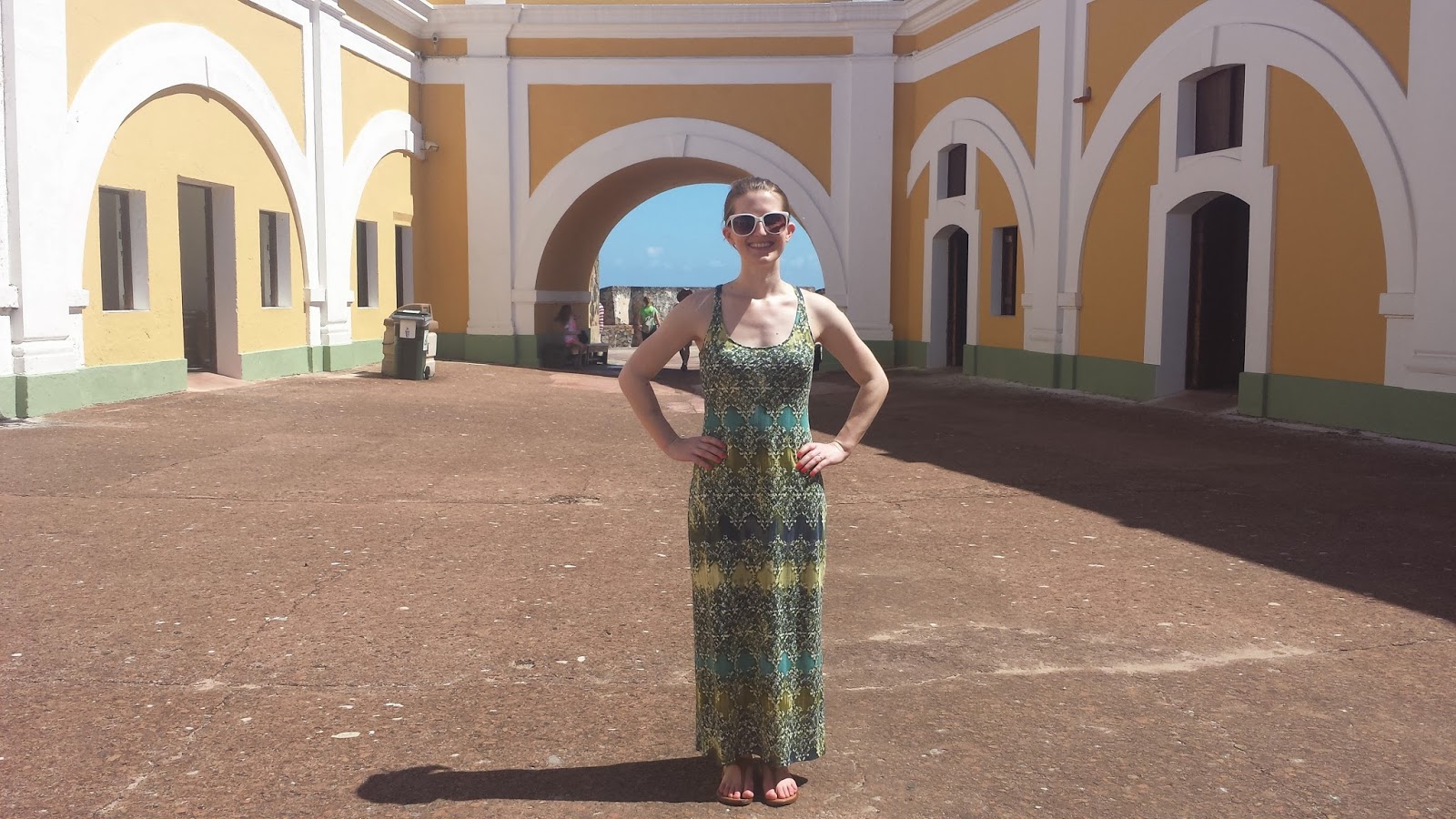 How I wore it for most of the walk around. It also turned out to be National Dog Day, so there were dogs everywhere and all kinds of things going on outside the fort. Lots of kites too. 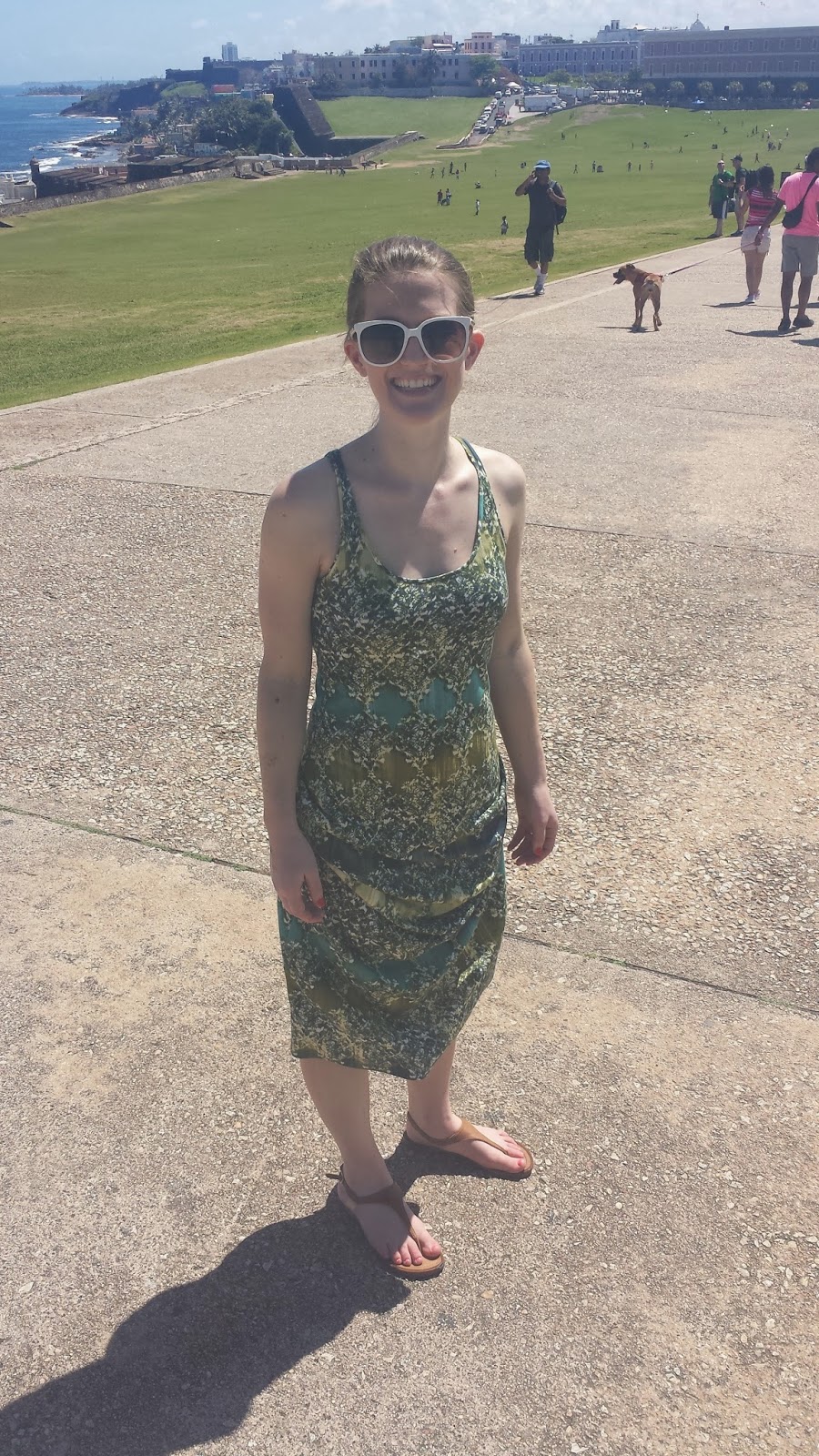 Thanks for looking and everyone should buy the pattern; it is so easy to make and looks so good, while being comfortable and awesome!
Posted by Molly at 4:13 PM 4 comments:

On Saturday, we went to two estate sales. It has been a long and cold winter, so we haven't gone for months. Especially since it is "a thing" here to make you stand outside in a line as they let people in one by one. That is always annoying, but the cold makes it unbearable. 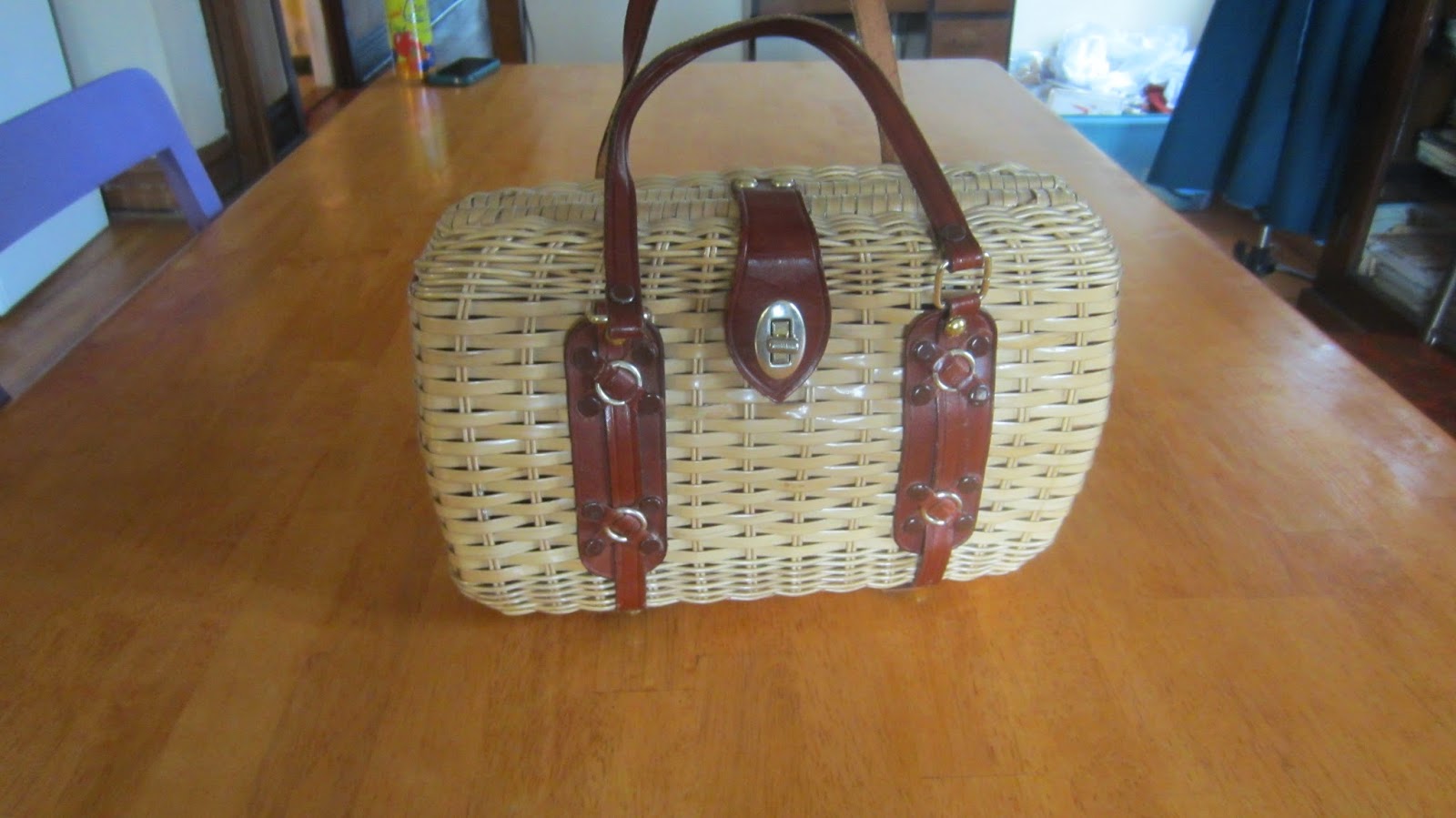 This wicker purse reminded me of something Camelia Crinoline would have, so I bought it to sell on Etsy. Andrew said it was ugly and looked like picnic basket, so that made me want it more. As I carried it around the sale, I grew to like it. Now it is my purse. It makes it easy to find things because it folds open like a suitcase. I feel like a giant hipster carrying it around, but oh well. Only five dollars!

I also finally sold all of my Swirl dresses on Etsy and now I listed some estate sale fabric I will never use. Go check it out, if you're interested!
Posted by Molly at 5:47 PM 2 comments:

At some point in the last year, we decided we would go to Puerto Rico for my 30th birthday/our 1st wedding anniversary. So we went for a long weekend at the end of February and it was AMAZING! We had so much fun and the weather was beautiful!

I knew I wanted to make the Mission Maxi pattern that my mom had given me at Xmas. I had a big piece of thin green knit fabric and I decided to use that as my muslin. This pattern is a piece of cake and it came together so easily- really, like you can cut it out and sew it just a couple of hours! The "muslin" turned out so nicely that i ended up bringing it along to wear, too.
These pictures were taken at the hotel we stayed at, El Conquistador. The knit is a tiny bit too thin, as it shows every lump, bump and line of underwear. I do think I will buy a racer-back bra to wear with these, because strapless bras are so annoying. 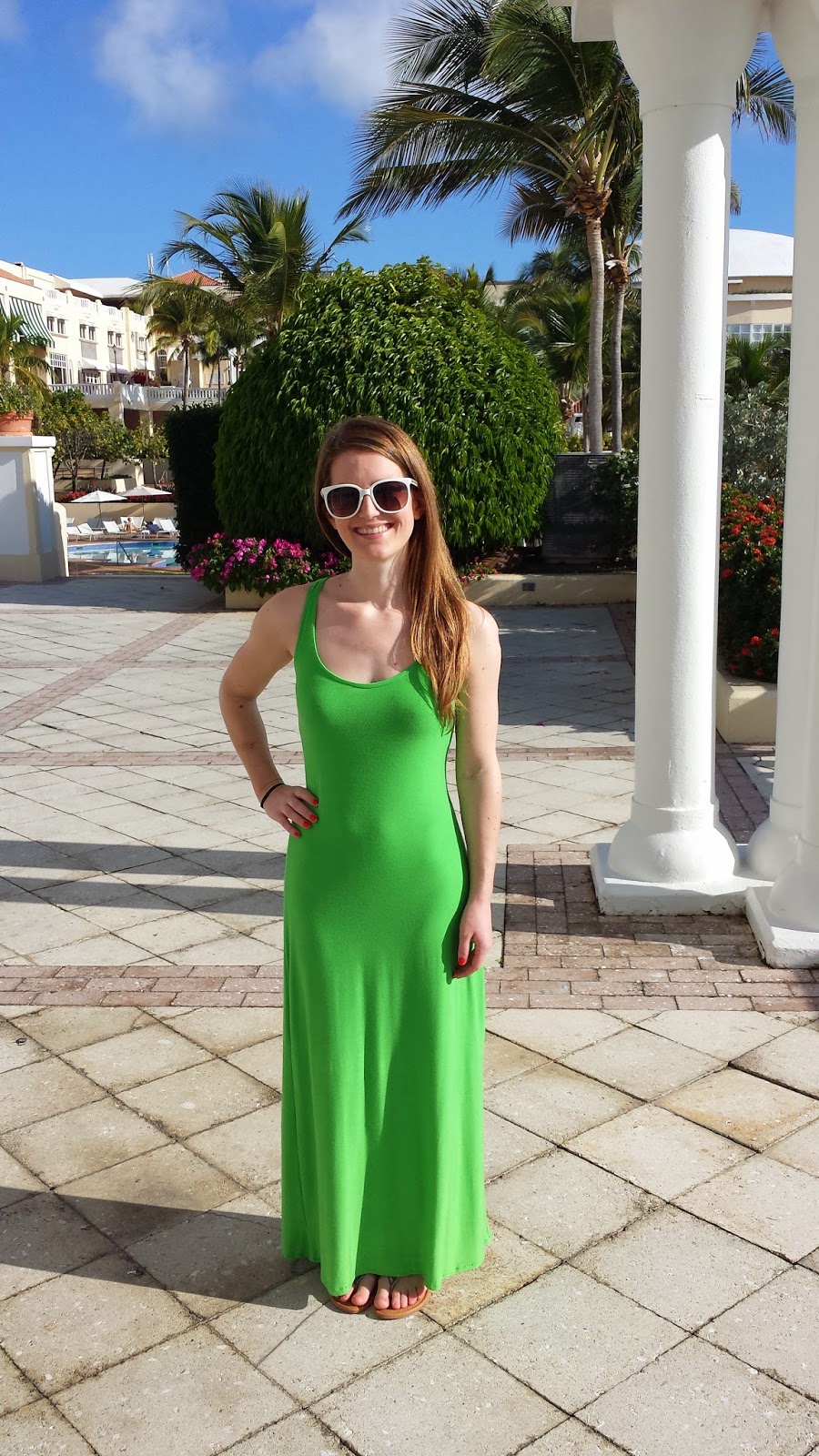 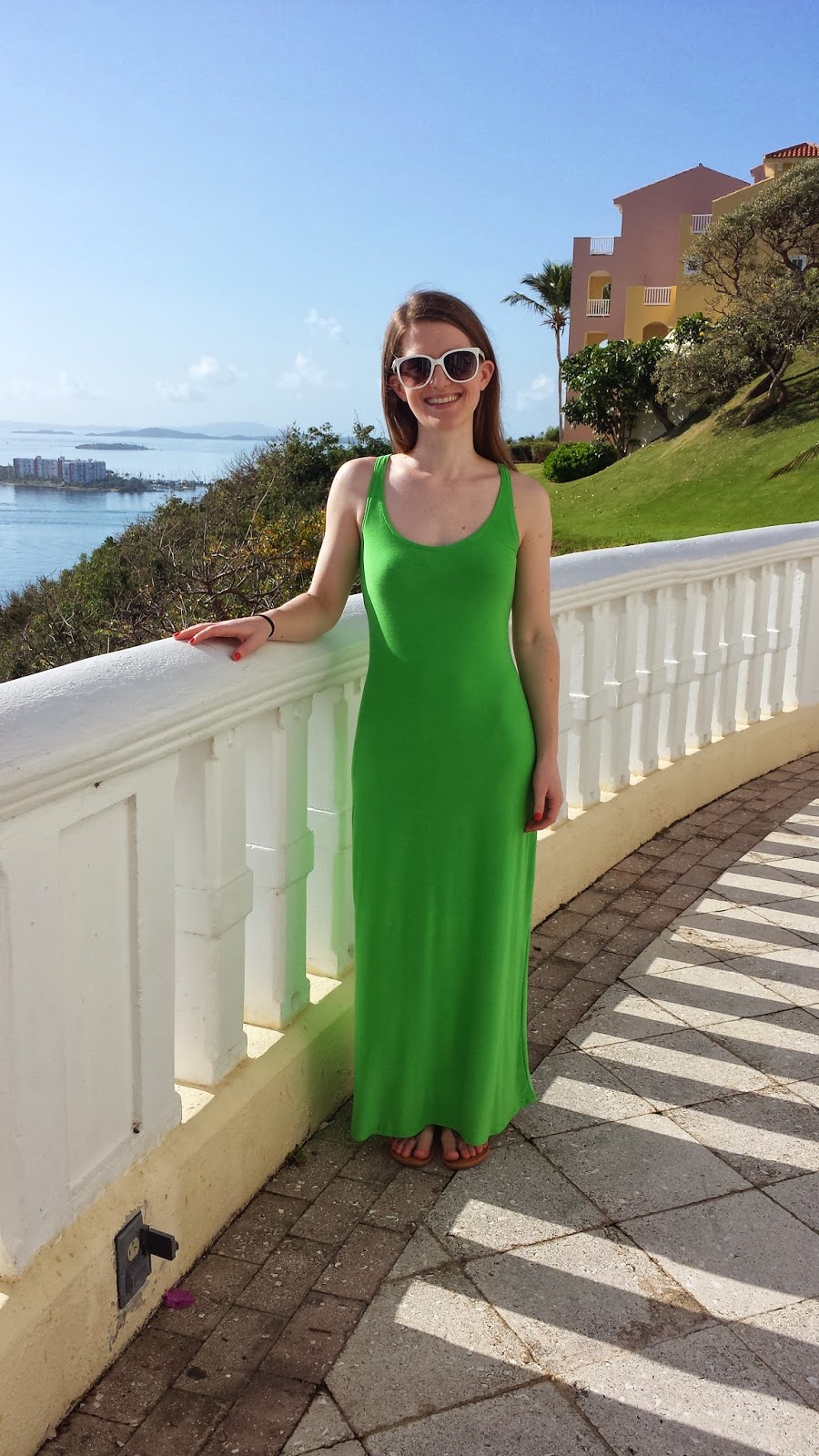 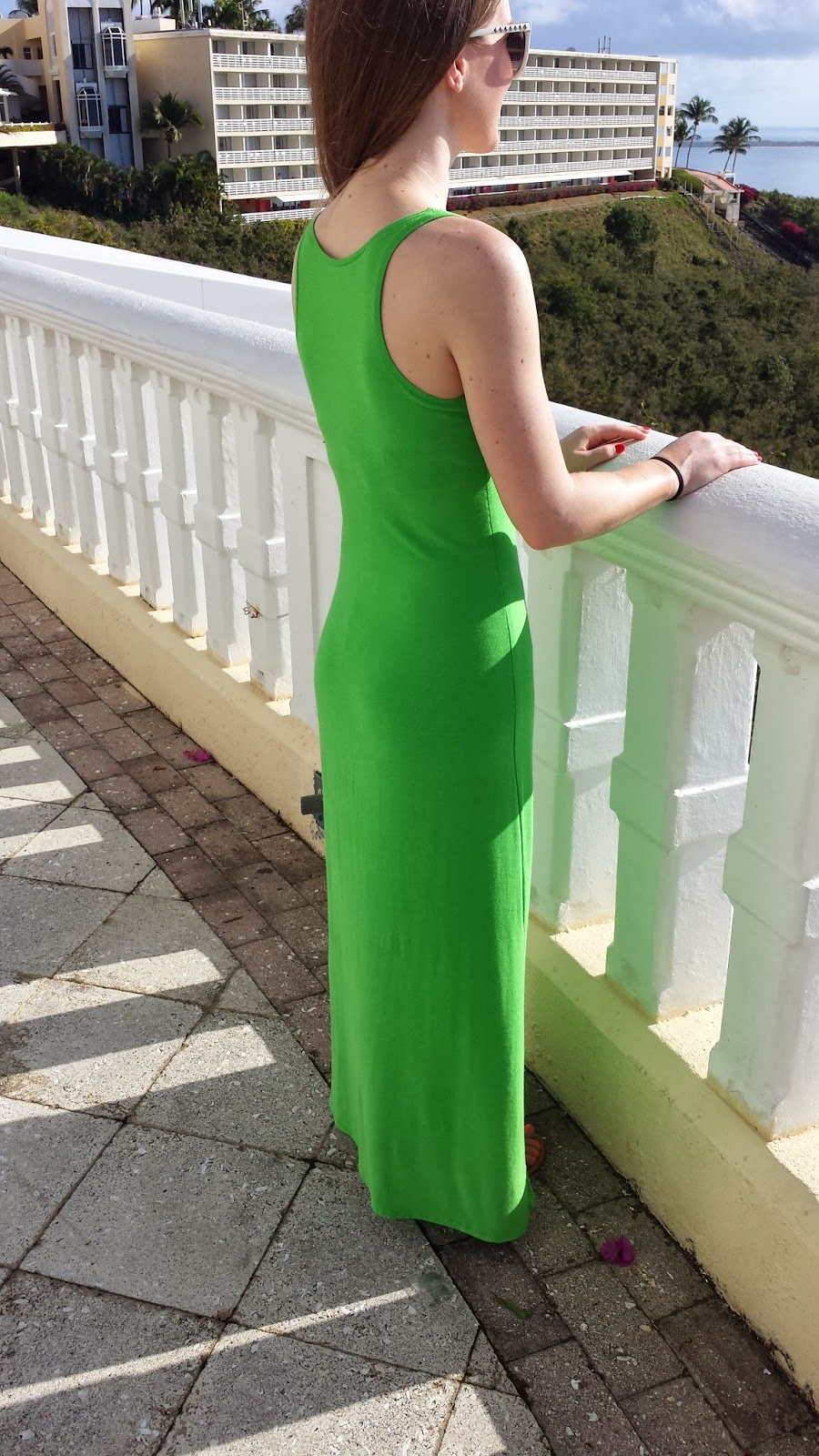 I am pretty happy with this dress, and I will post about the second (even better) version later!

These two dresses were the only things I made in February. The endless winter is not inspiring me to sew, and school consumes a lot more of my time than subbing did. I am having so much fun teaching French now, so that is perfectly fine for me! I hope to make myself sew more as the weather warms up and I can wear the things I make. I think everyone loves sewing for Spring and Summer, am I right?
Posted by Molly at 3:13 PM 8 comments: