I didn't even technically make a vintage pledge for 2015, since I was already huge and pregnant in January and I had somewhat low expectations for how much sewing I would get done. That eventually was lowered down to nearly zero.

Kerry of Kestrel Makes did ask me early in the year to do one of the pattern stash interviews and being an experienced mom, she let me put it off until the fall. I delusionally expected to get it done during my maternity leave. Ha. I was featured in December. I now can see I have some serious pattern hoarding (and finding) contenders in the Chicago area like Tasha, Michelle, and Liz. They have some awesome patterns.

Anyways, this was my first sewing project for post-baby Molly for 2015. Let me take you way back in my time machine to around September. I was back at work and I though about making a skirt. I had a huge piece of plaid flannel-feeling fabric from the year before that I bought at Jo-Ann- I think they are called Plaiditudes.

I wanted to use Advance 2469, view 1 with the cool pockets. Right after school started, I had not lost the last ten baby pounds so I knew I needed to increase the waist from the 24 of the pattern to the 28 of my current size. This pattern is from the 40s and is completely unmarked; it just has the holes of various sizes for marking and you figure it out.
Okay, so just to recap, after having a baby and not sewing anything for myself nearly a year, I decided that my first project back should include:

Great, can you see where this is heading? lol

Let's start with grading the pattern. You know, I added a half-inch to the outside of each piece and it does correspond accordingly. It's just that at work, I am always on my feet as the co-teacher walking around the room and helping students. So after going back to work, those ten pounds melted away and I am back at my original weight (though jiggly). So the skirt doesn't fit and I can't take it in because of the....
Attempt at matching plaid! This plaid has a somewhat weird repeat and I had a really hard time trying to match it while cutting on the bias. I did a fairly good job cutting it out, but the fabric is thick and I still don't have a walking foot. So in places the layer fed unevenly and the plaid is slightly off. I am not sure why I thought bias cut skirt + plaid = magic in the first place... so if I took it in along the side seams, the plaid matching would be off by even more and would be super visible.
The pockets are the cool feature of this pattern and they are really unique. They are only sewn on in one row of stitching under the flap. So the pocket bag and the flap are both floating. 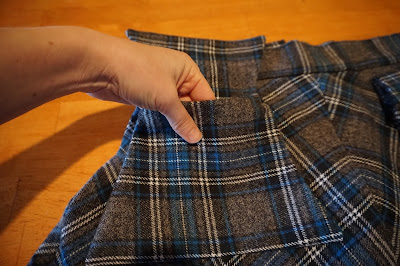 With a baby and a full-time job, finishing this took a few weeks. The thought of then hemming it by hand was just too much. I rustled through my notions and found some vintage, black, iron-on hem tape and I went to town! It worked as advertised and it gave the hem a little more volume, a little like horsehair braid dialed down a bit.
The back lined up fairly well in regards to the plaid. For some reason, like forgetting how to sew after such a long break, I thought it would be smart to use an invisible zipper. I don't have an IZ foot, so I just used a regular foot. This led to the infamous bottom-of-the-zipper-poof where it looks like "maybe that lady has a tail? under her skirt?"
Probably should have reinforced the waistband with something too...

I can't blame the pattern really. Using an unmarked pattern just expected a little too much of my skills/memory after such a long break from sewing anything slightly complicated for myself. I think the last thing I made for myself was the same maternity pattern three times before Christmas of last year... 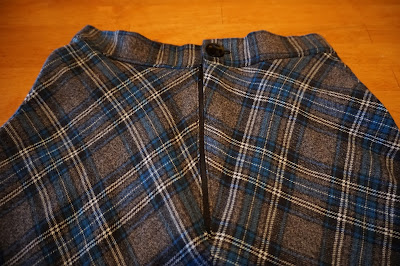 Anyways, I will just donate it I guess. Commiserate with me, maybe? Oh well, you live, you learn as the great Alanis Morisette once said. lol

To part, here is a picture of Max at City Park in New Orleans just after Xmas. He's sitting in a oak tree being adorable!

Max goes to France, plus some fabrics from Paris

We had a long-planned trip to France over Thanksgiving for Max to meet his great-grandparents. It was a really great trip and everyone loved Max of course!

Shopping for the baby is very satisfying, so I bough a bunch of cute French clothes. Some are 18 months sizes, so he is not quite big enough until the Spring probably.


One afternoon we went up to Montmartre to walk around and stop at Chateau Rouge. That is the metro stop near the African market and all the wax fabric stores. Two summers ago, I shopped around and couldn't decide on anything. This time, there was a new shop that had just opened. It was very organized and had new stock that wasn't picked over- lots of good prints with different colorways in each.

All three are the full panel that you get, six meters or something like that. The left one is pink and green with a shiny gold design; it is hard to see unless you click on the picture and make it bigger. I really like the primary color one in the center with chickens. The right is blues and greens with an abstract plant design. 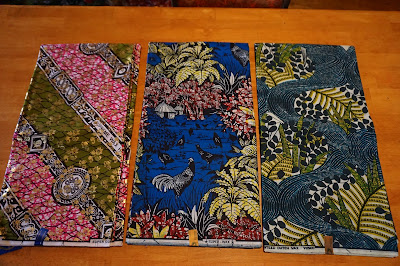 Max is too big for the Baby Bjorn now. I missed the December Babywearing International meeting and there isn't one in January, so we don't have any other carriers right now. I think this weekend I am going to wash one and try some back carries. He is only 20 lbs, but he is too heavy to wear on my front anymore.

We also went to Marche St. Pierre and I bought some light polyester prints that will make beautiful dresses for the spring and summer. I don't have a specific plan in mind, so I bought two meters of each, just to be safe.


They are all very drapey and light. I hope to make something cool! I am back to my previous weight and shape (minus the squishy stomach muscles), so now sewing isn't also a huge trial-and-error, fitting exercise. I can just go back to my old size and modifications!

I should really start on the spring dresses now and maybe I will finish them  by the end of summer, lol! Any pattern ideas?
Posted by Molly at 7:56 PM 4 comments:

The (late) winner of November's pattern giveaway is Amaratha, aka Megan from The Quirky Kiwi. Email me with your mailing address at mollysewsblog@gmail [dot] com.


I made this yoga bag quite a while ago, perhaps during the summer before I went back to work? 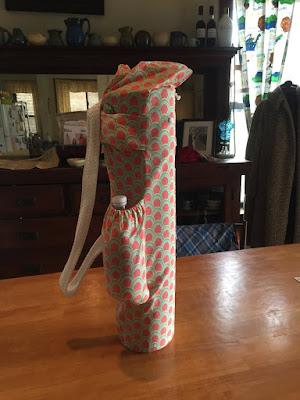 I spent a long time on it- probably too much time, to be honest. I measured my thick yoga mat and made a rectangle. The base is a circle and I math-ed it out so it fit perfectly. I added the big pocket for a water bottle; the neck has elastic so the bottle doesn't fly out. 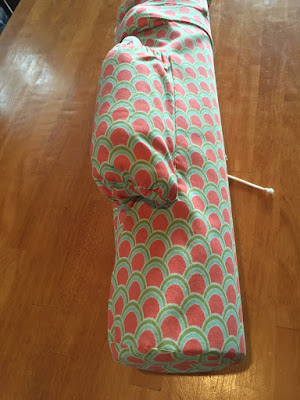 The bottom of that pocket is a semi-circle, which prevents it from sagging too much. 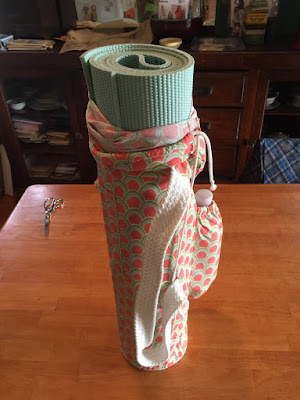 It closes at the top with a drawstring tie. The drawstring flap should have been more shallow, so it balloons up at the top a little too much. The shoulder strap is a really nice 2 inch wide braided trim. The fabric and trim are all from Jo-Ann's, since this was a spontaneous project. I had been using a fabric shopping bag for all of my yoga stuff. 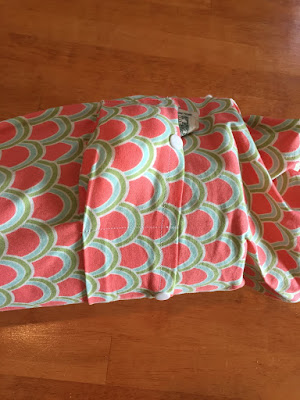 Near the top of the bag, I made three pockets. One is for cash or my credit card. One fits my keys. The other can hold a lip balm and kleenex. That's basically all I need for yoga!

I spent an absurdly long time matching the print to make them invisible. I used the plastic baby snaps to close them, which is kind of a pain to use. The pockets are annoying to use because they are a bit too small for each item because I didn't account for enough ease. That makes them poof out when in use.

So the yoga bag worked reasonably well, and then I went back to work in September and haven't gone to yoga since. I do work on my feet all day as a special education co-teacher, which helped me finally drop back to my pre-baby weight! I do need to work on toning my sad and stretched out stomach muscles though!

Sweet baby Max is now ten months old (maybe 8 or 9 in this picture) and I hope that for 2016 I can sew one project a month. I miss sewing, but it is so hard to sew when I am so tired. I need mental energy to sew, otherwise everything is backwards or wrong ad I spend more time with the seam ripper than actually making things! 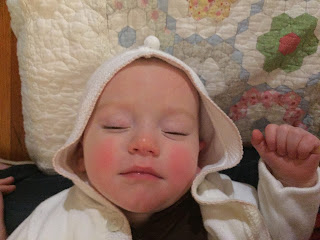 Here's hoping that 2016 has more sewing in my future!