August's giveaway winner is Renee! Renee, please email me your mailing address at mollysewsblog {at] gmail{.}com!

Andrew and I spent a lot of time in Paris walking around and we would stop and read the ads for apartments for sale. This one was the best:
Guys, it's only about one million euros! How about an early Xmas present? :)
Posted by Molly at 4:24 PM 1 comment:

Corsican Swimsuits or Swimwear without a zig-zag stitch

I bought some cool Lycra at Discount Textile Outlet here in Chicago before we left on vacation because I wanted to make two swimsuits. Enter August's Giveaway if you want to win what is leftover!

Now swimsuits themselves are not hard to make, but I have an old Singer 15-91 and it of course only does a straight stitch. I do not have a serger or anything else either, so I needed to design a swimsuit that didn't really need to stretch. This means a tie-side swimsuit and I spent some time looking online until I found a version from Nordstrom's that tied in the front and was cute.

I cut apart a pair of underwear as my bottoms pattern and then made up a trail version (below). I topstitched the edges which made them look terribly wavy and lose all the stretch. Plus I forgot about logic and lined the ties with the nude lining, so that it showed and looked awful. The crotch and leg lines were too wide and low and were very uncomfortable.

This is my end pattern, with all final tweaks included:
The green version was my copy of the Nordstrom's suit. It has a chest band that ties in the front and the neck band is one piece. The neck band ended up a tad too long, so I had to shorten it; it was meant to have all the seams hidden by the lining...

The bottoms tie on the side with self lined pieces to not look super tacky and ugly. I narrowed the leg openings and crotch  to eliminate the pinching and bunching from the test run. 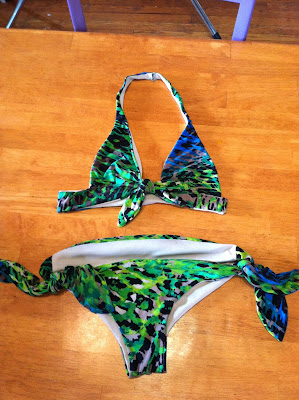 Pictures from Corsica (we were staying on the north coast of the island near Ile Rousse): 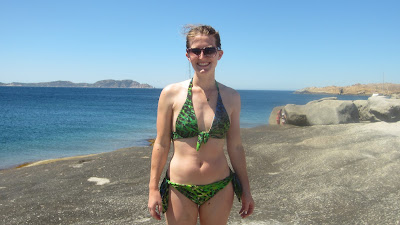 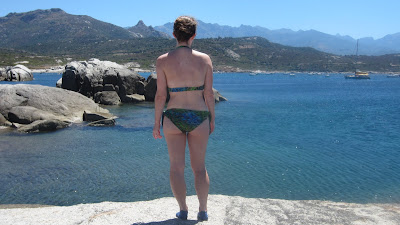 I made the pink and orange one second, with a  few tweaks. I made the bottoms a bit smaller and with a lower waist on the back and the top ties at the neck and in the back rather than the front. 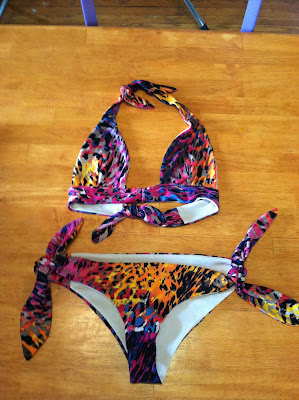 The top stretched  a little on the band, which I did not anticipate and therefore made the space between my boobs a little too big. The top on this one needs the front seam taken in maybe an inch. Good thing we were in France and no one cares that you are popping out of your top every time a wave comes by... 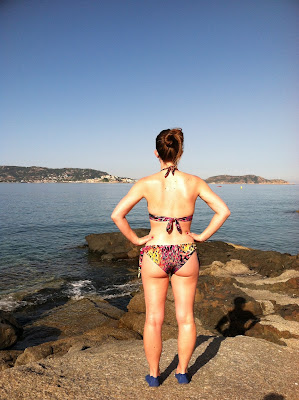 You can see Calvi across the bay. This is a different beach than the other pictures, though both are rochers (large boulders instead of sand). There are sandy beaches, as well. It is such a beautiful place to visit and we had fun visiting Andrew's grandparents and family there. 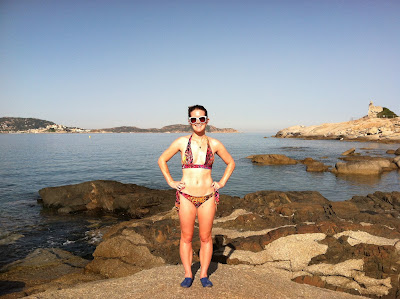 I hope to get a serger at some point to make my clothes look more professional on the insides... The green top is my favorite and the pink bottoms are better. Mixy-matchy time?
Posted by Molly at 11:47 AM 6 comments:

August's giveaway is only open to US residents, as the box may be a little heavy!

Winner will receive all three pieces of swimsuit Lycra with a two way stretch. Now these are leftover from the suits I made, so my guesstimates are of the amount left, not including long stragglers.

The nude lining was originally 2 yards of 60" and I would say there is well over a yard left. 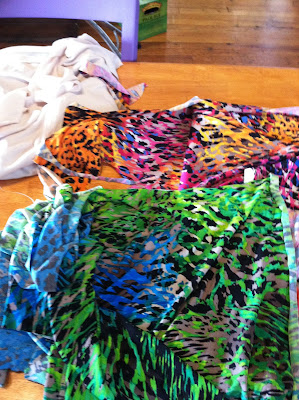 Leave a comment by Thursday at midnight and I'll enter you in the giveaway! You can listen to Easy (who knew Sheryl Crow is signing country now, yay) and sew a swimsuit to wear for September or next year's dream vacation!

I bought all the fabric at Discount Textile Outlet in Pilsen and the prints were 11.99/yd and the lining is like 2.99.

In Paris, Andrew and I took the 4 line to Chateau Rogue and went looking for wax fabric. I had never been to the neighborhood, even though we lived in Paris for a year. It's certainly interesting; the neighborhood is all African immigrants/descent. Even getting off the train I saw tons of women wearing the kind of fabric I was looking for!

Basically, all the shops are on Rue des poisonniers and there are quite a few. I found three prints that I thought about buying, but in the end I didn't get anything. I don't mind spending the money, but it was more the quantity. What am I going to do with six meters of the same print?

I was undecided, so we walked over to the Marche St. Pierre, which is the fabric shopping section of Paris. This was all new and exciting, as I got into sewing after I graduated from college and it wasn't my thing when I lived there.

I ended up buying two meters of this viscose print. It's kind of abstract and geometric, but with peacocks! aww yeah! 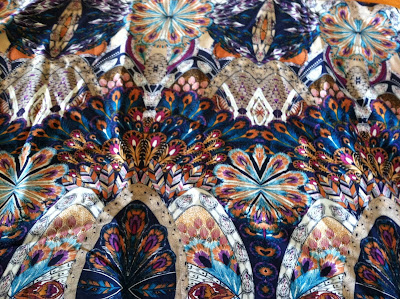 The we went and sat on the steps of Sacre Coeur and had some fun people watching, then went and had drinks and dinner. It was a fun day!
Posted by Molly at 12:59 PM 6 comments: