Last Halloween I made myself a Marie Antoinette costume. I was pleased with myself, since I did not use a pattern, but instead drafted my own pieces out of muslin. I made it out of cotton, rather than a shiny fabric, because I was poor. However, it turned out really well. I think if I had powdered my hair white, more people would have gotten the idea. I ran out of time, so the buttonholes are just slits I cut in the back. I did just learn a few months ago that the alternations lady at the dry cleaner's will do buttonholes for only a few dollars each. I don't think I will ever learn how to if its that cheap! 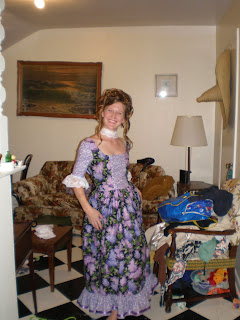 I also made my boyfriend a pilgrim costume. That mainly consisted of adding a collar and cuffs to thrift store clothes, but it looked hilarious. 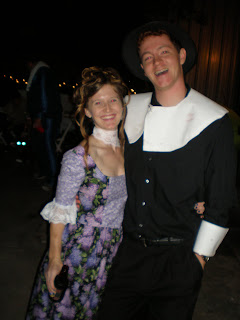 Finally, I made my wiener dog a Chiquita banana costume. He was sooo cute. I made it out of felt, so it was easy to sew, pretty sturdy and cheap. It turned out beautifully, although the dog did not enjoy being fitted for his costume. 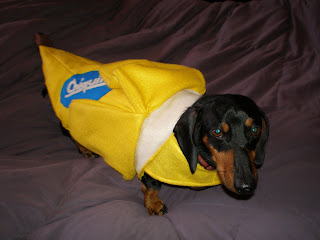 Try to ignore that pitiful face he is making. It's supposed to look like you were peeling a banana and a dog popped out. 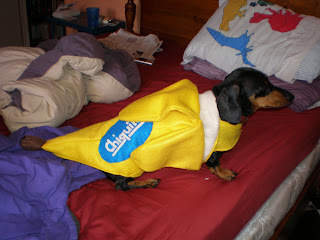 So cute- and we all had a great time!