I bought this pattern at one of those great estate sales where the people desperately want to get rid of stuff, instead of overcharging for junk. I got this, and an apron pattern, and my sewing box pattern and a bunch of zippers and stuff for like $2. Cool.
It is Simplicity 7424 from 1948. It gives you the two styles of slippers and then a million transfers for embroidery. I know how to do some embroidery, but I don't like it, so I left that off. My fabric is busy enough, as well. 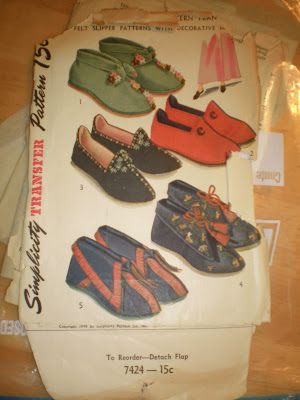 Look at the instructions! One page, tiny font, no pictures (except the eight embroidery stitches you need to use)! So I was left to puzzle this out on my own. 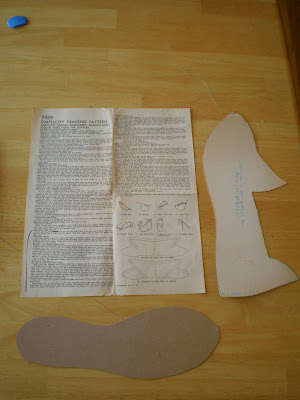 Here are all of the transfers. It looks like the original owner made a pair of medium sized slippers and used some transfers, but there are so many left. I wonder if they would even still work 63 years later? 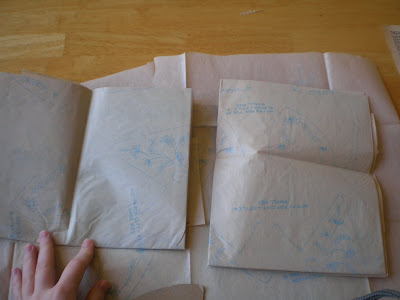 I made the medium, since they were already cut out. I cut 2 soles and four sides for each foot. Then I sewed 2 sides together along the foot hole and repeated for the other 2. The i put them together and sewed the toe and heel seams. At that point I got stumped and thought that I had ruined it all.
Then I figured out how to turn them right side out, and it was fine. I sewed the soles together and turned them out. Then, instead of basting the top part, I just sewed the two pieces together along the bottom, to secure them. The pattern wants you to use a 1/4 inch seam allowance.
Then I slip stitched (or whip stitched?) the top to the sole. However, when I got near the toe I saw that there was much more fabric for the top than the sole, so I made some random tucks near the toe to use up the extra fabric. See below. 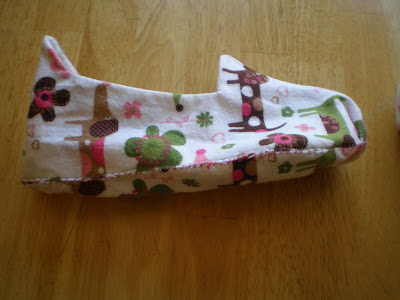 For the second one, I learned from this. When I basted the top together, I used a 1/2 inch seam allowance and trimmed the extra away. This made it fit perfectly together. So #2 look much nicer.
When I was done I showed them to Andrew. He said they looked nice but this (pointing to the whip stitching) looks kind of.... Then he said "Why don't you just?" and turned them inside out. I was like "Oh, duh, they're reversible!" And that made them look so much better.
Inside (or right) side out below. 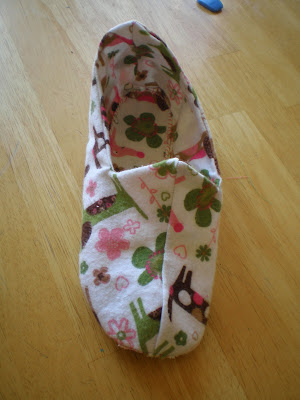 Medium ended up being kind of baggy (for size 6 feet), but I can wear them with socks, which is good. If I make them again, I would make a small, and make them out of a warmer fabric. I think I saw some fake sheepskin at a fabric store recently, that would be delightful.
The used maybe 1/4 or 1/2 a yard of fabric and the machine sewing took maybe and hour, and the hand sewing took 1.5 episodes of Rome, so maybe another hour and a half. I am slow at hand sewing.
It was fun! Everyone should make some slippers!
Don't forget to enter the giveaway, if you want some patterns!
Posted by Molly at 10:40 AM