I was lucky enough to be a pattern tester for another of Tasia's patterns, the Tofino pants/shorts. It was still cold here in Chicago when testing took place, so I made the pants and they are an absolute delight! I have worn them so much in the 6 weeks or so that I have had them!

Here is the pattern: 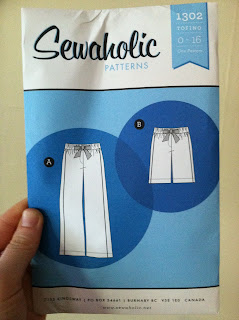 Since I am not really "pear-shaped," they body type the patterns are designed for, I made a 0 and they fit nicely. Don't worry about them being too short for all you normal height folks, I had to cut off quite a few inches on the hem. 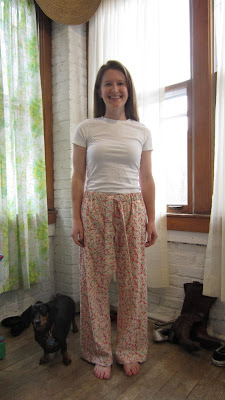 I used some cute cotton from the haul Alicia gave me a few months ago. It is salmon and teal and off-white print. I stongly suggest making your own piping, which Tasia provides pieces and instructions for. I bought some piping in a "contrast" color from the shitty selection at Jo-Ann and after I sewed it on relaized it look atrocious. So I ripped it off and ended up with no piping, which is such a cute detail! Sadz. I will be making more pairs, though. 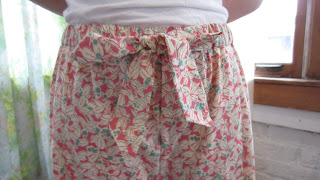 The bow is cute and the elastic waist is comfy. 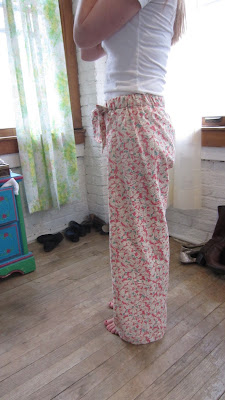 i have been wearing them constantly for about 6 weeks now. I need to make another pair just to give these guys some relief.

The true sadness was right after we took the pictures to send to Tasia, I was rummaging through my makeup, which is on the shelf by the bathroom window. I knocked off a bottle of neon orange nail polish, which then shattered on the floor and exploded EVERYWHERE including on my first-time-worn pants, the wall and the tile. Witness: 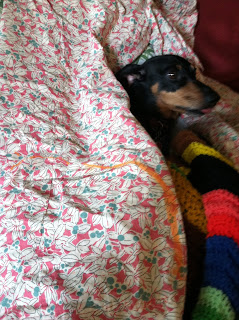 I have still been wearing them though. That was the first time in my life I had broken a bottle of nail polish and then in the same WEEK, I broke a bottle of gold polish in the same way in the same spot. Clearly, I am learning...I did jump backwards in time to save my clothes and some acetone fixed the floors and wall.

Sorry I have been posting so infrequently, I have been gardening and doing pottery and being lazy and I have been sewing, but I need to take pictures of my projects!

if you want some cute pj pants, you can buy the pattern here!
Posted by Molly at 6:37 PM