Andrew and I went to two estate sales nearby on Saturday. One was just some random stuff, doors for sale and a basement. We went downstairs and I was like"ohhhh!" Andrew said "the sewing machine?" I had not even noticed the machine, as I was staring at the exact same bouncy horse that I had as a kid. Obviously, I do not need a bouncy horse, so I turned my attention to the machine.

It was a Singer and the table was cool and it is a treadle. After making sure everything moved and turned, and it did, I asked how much. The guy said 40 but he was willing to negotiate. He accepted 30 bucks and helped Andrew carry it upstairs. That was really nice, since they don't have to help and usually don't, I assume for liability. (I have stitches in my shoulder from getting a mole cut out and can't lift things).

Then, we tried to jam it into our Mazda 3, which let me tell you is no Oldsmobile 88. It did not fit in the trunk or in the backseat. Andrew ended up going back inside and the guy was nice enough to drive it to our house in his minivan for ten bucks! So, in the end, it was $40.

I found a good website with info on cleaning up old treadle machines and bought some cleaning things on Sunday, but didn't get started until this afternoon.

Today, I only worked on cleaning up the cast iron base. I used warm water and white vinegar with a painter's towel and then dried it with a rag.


After about an hour of wiping and using an old toothbrush for the details:
The base is still partly rusty from sitting in a basement for so long. Andrew said he would help me sand and refinish the table and repaint the base. I expect it will look amazing!

I haven't even attempted to clean up the top yet, but the wheel turns, the needle moves, it has the bobbin and bobbin plate and just needs to be cleaned and oiled I think. Also, it needs a new leather belt, but those are only about $9 online.
Nearly all of the decals are still in good shape. The chalky white stuff came off when I licked my finger and rubbed it, but the website I found said to clean the entire head with sewing machine oil. I haven't gotten that far, yet.
I googled the serial number and it is from 1919. It will be fun to clean it up and get it working. Learning how to use a treadle will be interesting as well. I promise at some point I will start going forward in time, instead of backwards, and get a machine that does some modern functions... like a zig-zag! :) 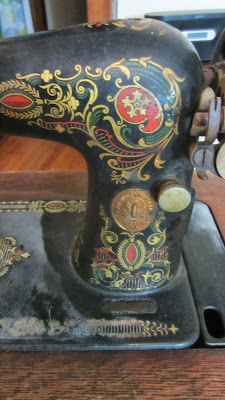 Regardless, both the table and the machine are beautiful and I'm excited for this project!